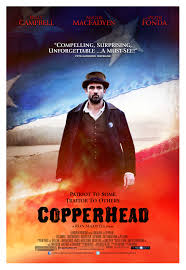 You may remember a month or so back I wrote an article about American Civil War Copperheads. If you are not familiar with this term, a Copperhead is “a member of a vocal group of Democrats located in the Northern United States of the Union who opposed the American Civil War, wanting an immediate peace settlement with the Confederates.”

My timing could not have been any more perfect.

I was just informed that a new Ron Maxwell movie is about to hit theaters–Copperhead the movie! That’s right; the man who brought us historical greats such as Gettysburg, and Gods and Generals has unleashed (what I can all but expect to be) another great Civil War-based movie.

Below is an interactive web app that allows you to get involved with the movie: a Civil War history quiz, a behind the scenes look at the making of the movie, and even some recipes from this era. The quiz is not too difficult. The average score on the quiz is a 5/8–I would be interested to see how you guys fare. More importantly, the app below give you an opportunity to request to have the movie shown in a theater near you. This movie will only be shown in select theaters, and unfortunately, my city–not even my state–is on the list. So play with the app below and if the movie isn’t near you, request that it comes to your city!

When you watch the trailer, click on the Youtube button that appears on the right-hand side. Doing so will allow you to watch it in a much larger screen, in HD.