History Through the Eyes of Artists

Reading about the French Revolution in a textbook is a different experience than reading a novel on the same subject, or watching a live performance of Les Miserables or contemplating Jacques-Louis David’s “The Death of Marat.” Altogether, historical and fictional interpretations of the world around us shape our understanding in a way that a single medium could not. And in many ways, artists have played a big role in helping us understand the world.

The following are some of the ways artists have led to a greater understanding of cultures and historical events.

Warrior-artists among the Plains Indians were great documenters of their achievements and experiences. What began as drawings on rock and deerskin continued with pencil, ink and canvas as Native Americans came into more regular contact with Europeans. In the late 1800’s, as conflicts between the invading Europeans and natives escalated, the numbers of what came to be known as “ledger drawings” increased. They are an example of art being inspired by history in the making. It’s thought that the increase in ledger drawings reflected society’s concern that traditional Native American lifestyles were being threatened. And that turned out to be true. Thankfully, the ledger drawings now serve as valuable historical documents that show a way of life that might otherwise be forgotten.

One modern Native American artist, Joshua Hinson revives ancient themes in his work, which is well-known at the Chickasaw Cultural Center, a Native American Museum in Oklahoma. Hinson is Director of the Department of Chickasaw Language in the Division of History and Culture for the Chickasaw Nation. He also creates artwork inspired by the traditional shell engravings his ancestors were known for. In doing so, his art keeps historic themes alive while educating new generations about valuable tribal traditions

A different take on the Holocaust 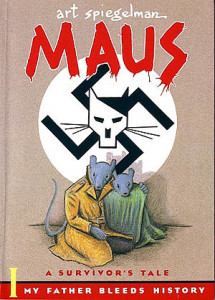 Most people wouldn’t think of “Holocaust” and “comic” in the same sentence, but Art Spiegelman took a risk more than 20 years ago when he penned a comic about one of the most horrific events in history. His Pulitzer-Prize winning comic, “Maus,” portrayed Nazis as cats, Poles as pigs and Jews as mice. But this isn’t a publication for children. In fact, Spiegelman told The New York Times that giving the comic to a child would be “child abuse.” But the method in which he chose to explore the Holocaust reached audiences in a way that different mediums had not.

Showing the reality of war

“Saving Private Ryan” is a film written by Robert Rodat and directed by Steven Spielberg. It’s set in World War II and is the story of a squad charged with finding and safely retrieving Private James Ryan after his three brothers, also serving in the war, have all been killed. The movie begins with one of the most graphic and realistic depictions of close combat civilians are likely to ever see. The makers of “Saving Private Ryan” attempted to highlight that war has real, human costs that many people never see.

Visual arts, sculpture, photography, filmmaking, painting and printmaking make it possible for viewers to relive and connect with historical moments in an immediate and sensory way. Throughout time, artists and visionaries have documented political and cultural struggles, war, social inequity and human suffering and triumph.

Felicia Savage is an up-and-coming PR specialist and political junkie living in Indianapolis. When she isn’t sharing articles and tweeting, Felicia loves sipping tea, cuddling her cat & spending hours on Pinterest. Follow her on Twitter @FeliciaSavage.