The city at its largest was populated by about 20,000 people, larger than any city in Europe at the time. [1] The central architecture was a structure 100 feet in height and 955 feet long. No, I’m not talking about the Incan or the Aztec civilizations. The city I’m talking about is Cahokia, located right on the Mississippi River, in modern-day Missouri and Illinois.

Starting around 800 A.D., the Mississippi area became the site for a large city which was based on subsistence farming. Large trade networks existed between the groups of North America and Mexico where exchanges such as copper sculptures, farming techniques, and ideas were made.

Maize was the key crop of the Cahokia people and the tool which allowed it to grow to such a large size. Cahokia’s location next to the Mississippi River also created a fertile environment for crop-growing.

Monks Mound is the largest pre-Columbian earthwork in North America and it served as a central platform to the large city. Monks Mound is an earthen mound several platforms high, which involved the transport of many tons of soil to create. Social stratification and the division of labor was a significant factor in allowing the city to expand as it did. The platform structure was meant to increase the visibility of this social division by elevating the status of the Cahokia elite. The top of the mound originally held a structure, a temple of some sort, but the remains of this temple have not been located.

Woodhenge at Cahokia is the name of a site of wooden posts which served as a calendar to the Cahokian people, similar to of the UK’s Stonehenge. Three of the posts in the woodhenge circle served as seasonal markers but the remaining posts have no known function. Some scientists theorize that they may be significant as ceremonial days, but no one knows for sure.

Archaeologists do not know why, but Cahokia was eventually deserted by its inhabitants starting around 1300 A.D. Later, woodlands people took up residence there, but not for hundreds of years. European settlers also claimed the land and Monks Mound got its name from the Monks that made their gardens on top of the mounds. 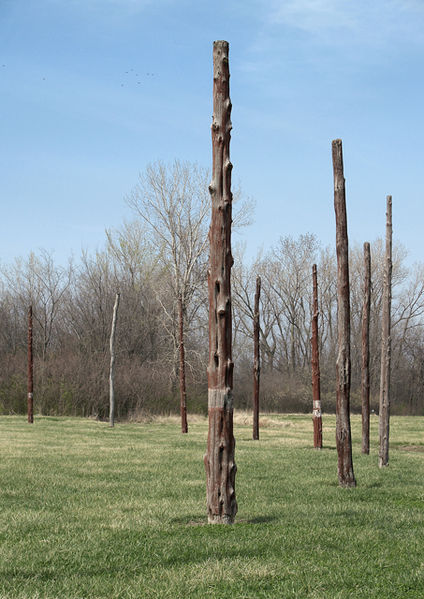 Today Cahokia is a state historic site in Southern Illinois and remains of Monks Mound, as well as artifacts, are on view. Because Monks Mound is made from soil, the rain over the years has significantly changed its appearance and it is considerably sunken compared to its original state.

Katherine Abu Hadal is a blogger with a passion for untold stories. To read more of her work on Native and Indigenous art, you can check out her blog, Native American Art School.