British scientists are now confirming with high levels of certainty that King Richard III’s body has been identified as the body found during the archaeological dig in Leicester, England, last August. They are so convinced that they are on the record as convinced “beyond reasonable doubt.” I cannot remember the last time that people–specifically the Richard III Society–were so happy to hear back from a DNA test, except for maybe this guy. —->

Experts of the archaeological team having previously believed this to be King Richard III’s body based on battle wounds and signs of scoliosis have now confirmed it with mitochondrial DNA. Using DNA from Michael Ibsen, the seventeenth great-grandnephew of Richard III’s older sister, they have proved that the body in question is the king’s.

When Ibsen received the results, he said, “I never thought I’d be a match, and certainly not that it would be so close, but the results look like a carbon copy.” [1]

King Richard III’s remains, which have been in the care of Richard Buckley, the lead archaeologist working with the University of Leicester, will be buried in Leicester Cathedral. However, this won’t occur until a complete and thorough analysis has taken place. (They estimate it won’t be until 2014.)

Here are the most significant observations made from the remains: 1) The archaeologists believe that King Richard III’s body was violently slain. They support this theory with the two severe blows that appear on the skull. (The skull is pictured below.) 2) The way that the arms are positioned led Richard Buckley to believe that the corpse was mistreated; at the very least that the body’s arms were tied together at the time of burial. 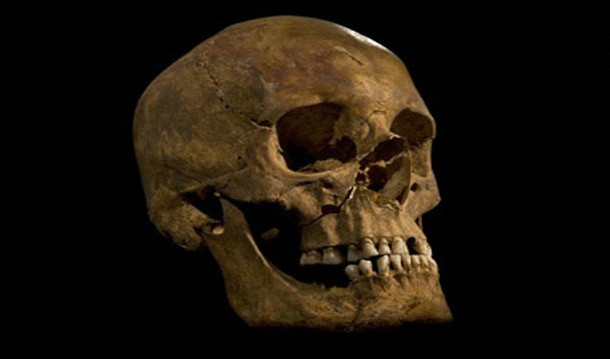 The one item of information that I have yet to discuss is the amazing length of time that stands between today and the death of King Richard III. This English king died while fighting during the War of the Roses, specifically in the Battle of Bosworth Field. This battle, which took place in 1485, was 528 years ago. On the scale of science, 528 years is nothing for a planet that scientists estimate has been here for 4.5 billion years. On the scale of history, that doesn’t seem like that long ago either. As the Natufian culture thrived 12,000 BC, 528 years seems like nothing. It’s big though. (In my opinion.)

One of the interesting facts about King Richard III is that he was the last King of England to die in battle. I think this speaks volumes about the changes in warfare. Compare that to battles that have taken place over the last several hundred years. You wouldn’t see–or expect to see, for that matter– President Barack Obama in a M1 Abrams (tank) or a Harrier Jump Jet (aircraft). At some point kings (czars, presidents, dictators, and other men of executive power) decided that they were more useful as leaders and not as men in battle. The last English king to lead his men into battle was King George II, in the Battle of Dettingen, in 1743. I think the fact that the wiki-author of the Battle of Dettingen felt it necessary to add the following speaks volumes on the effectiveness of royalty in the battlefield.

“At one point, George II’s horse ran off with him; it was halted by Ensign Cyrus Trapaud, who received a promotion as a reward.” [2]