How can you tell when a politician is lying?

When his (or her) lips move.

While I am fairly certain that this can’t be statistically proven, there is some truth to it. Just as recent as last week, President Barack Obama was caught in a lie. When asked “Have you ever fired a gun?,” Barack Obama told New Republic,

“Yes, in fact, up at Camp David, we do skeet shooting all the time.”

There are those that say that not only does President Barack Obama not do it “all the time,” but almost never. A recent article at Fox News says,

“‘The only time he shot skeet was for President’s Cup,’ said the source, referring to a shooting competition tradition involving the presidential Marine guards. ‘I was there. He stayed for about five minutes, and couldn’t leave fast enough.'” [2]

One of my personal favorite lies goes back to the days of President Bill Clinton. “I did not have sexual relations with that woman.”

The forming of the United States government–as we know if today–under the United States Constitution was accepted by the people because of one big lie, the lie of “unanimous consent.” Politicians can’t help but lie, they were raised to work under, respect, and follow the U.S. Constitution. The Constitution, starting with the words “We the People” is hardly a document of the people. The events that transpired  in the creation of the Constitution were hardly transparent to the people. In a memorandum for heads of departments and agencies, President Barack Obama stated that “Government should be transparent. Transparency promotes accountability and provides information for citizens about what their Government is doing.” [3] While this would be excellent to see happen, it wasn’t at all the way that our government was formed. The Constitutional Convention was held in complete secrecy, doors locked and windows closed.

The election of America’s first President of the United States was certainly not one of “the people.” While there were those like James Madison who believed that “the people at large” were “the fittest” to choose their leader, the first election took place with the men of the Constitutional Convention. George Washington ran virtually unopposed, winning 100% of the electoral votes. (Since electors were required to cast two votes for President, Washington was technically challenged by several candidates.)

Probably the slickest trick these men conspired to present to the American people was that the Constitution was written with everyone in agreeance.  The Constitution was presented as “done in Convention by the Unanimous Consent of the States present…” This is misleading  for several reasons. The first being that the state of New York did not have at least two delegates, so they were unable to vote. (However, as a good gesture they allowed  New York’s single delegate, Alexander Hamilton, to sign the Constitution as though New York had voted on it.)

You can hardly claim something to be of “unanimous consent” when those that opposed it didn’t vote. There were several men that disagreed with the Constitution and left the Constitutional Convention before it was finished  John Lansing and Robert Yates, delegates of New York, both left the convention when they saw that the others were unwilling to take heed of their warnings. In a letter to the governor of New York, Lansing and Yates stated that the convention wouldn’t “afford that security to equal and permanent liberty which we wished to make an invariable object of our pursuit.” Luther Martin and John Francis Mercer, delegates of Maryland, also left the convention before it was over.  All four of these men were against a centralized government.

There were those that never even showed up for the Constitutional Convention. There were eighteen people who did not show up to the convention. While there were those that couldn’t come for personal reasons and those that couldn’t escape their work, there were others that refused to come based on the ideology of a united, centralized government.  Patrick Henry, Mr. “Give me Liberty, or give me Death,” and Richard Henry Lee, one of the men who spearheaded the Declaration of Independence, both refused to attend the Constitutional Convention; Henry and Lee both feared a centralized government as well.

With those that refused to attend and those that left early, there were still those that while not voting against the Constitution, refused to sign it. When everyone gathered to sign the U.S. Constitution, Elbridge Gerry, George Mason, and Edmund Randolph did not sign the document. As well as not wishing to sign this document without a Bill of Rights, each man had their own additional issues: Gerry, opposed the three-fifths clause which was agreed upon in the “dirty compromise;” Mason, opposed the slave-trade clause of the “dirty compromise;” and Randolph, well, Randolph just wasn’t sure what he wanted.

With that being said, God Bless America and our lying politicians! 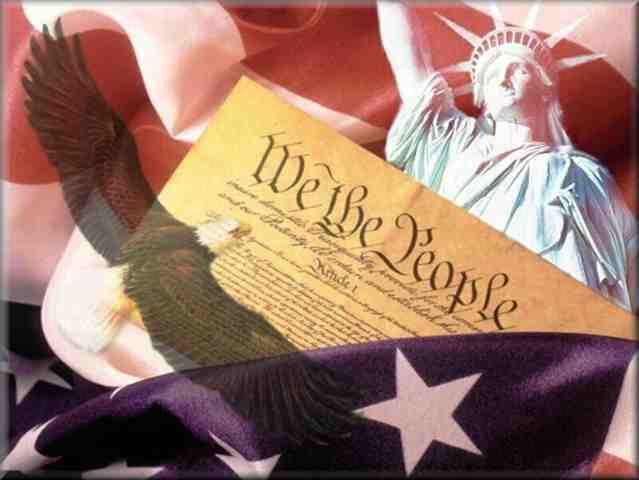 [1] New Republic: Barack Obama is Not Pleased: The president on his enemies, the media, and the future of football

6 thoughts on “American Government Built on a Lie”