Can you imagine a life without a microwave oven? Microwaves grant us a way to heat even the most frozen foods in mere moments without needing to wait for a fire to kindle or an oven to warm. It’s difficult for many people to envision a situation where they wouldn’t be able to have hot food on demand at any time of the day. The appliances are so ubiquitous and seemingly perfectly designed for food preparation, it’s even harder to imagine that their invention was largely an accident!

Like many machines we consider commonplace today, we can thank World War II for the technological foundation of modern microwave ovens. Toward the end of the war, Allied powers had developed a new form of radar transmitter that utilized high-powered electromagnetic radiation called microwaves. The radar could locate hostile and friendly ships and aircraft from miles away. 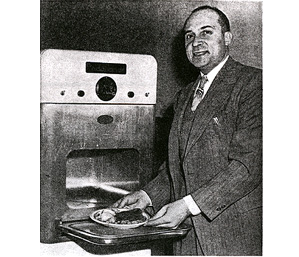 The radar technology was dependent on a magnetron—a vacuum tube that produces microwaves when a current passes through it. One American company that worked on developing and producing the magnetron was Raytheon, an industrial and military contractor and manufacturer that still exists today. In 1945, a Raytheon employee named Percy Spencer was working on an operating magnetron set when he noticed the chocolate Mr. Goodbar in his pocket had completely melted.

Guessing that the proximity to the radio device had caused the melting, Spencer and his coworkers exposed other foods to the waves, popping popcorn and causing an egg to burst. The implications of the device were quickly apparent; a method of quickly and safely heating food could revolutionize the food preparation process. Raytheon saw the potential of this new application of microwave technology and quickly moved to patent it, filing in October of the same year.
It would take the company a few years of research and modifications before they were ready to make microwave oven available for purchase. The first model was Ratheon’s Radarange, which hit the market in 1947. It was about 6 feet tall and weighed nearly 800 pounds! The device was accompanied by an equally bulky price tag of about $5,000, which was a small fortune in the 1940’s.

For the next two decades, Raytheon would continue producing large, expensive units, improving their product along the way. Even as prices slowly began dropping, though, microwave ovens were only within the financial reach of large restaurants and industrial food production companies.

It wouldn’t be until the mid-60’s that microwaves would be introduced to the home. Raytheon purchased Armana, a home appliance company. The expertise of the two companies together was able to produce a reasonably sized and priced unit. Seeing the success of the new Radarange, other electronics and appliance companies started producing microwave ovens of their own.

By 1975, 1 million microwaves were being purchased every year by American households, accompanying the maturation of the rest of the kitchen. Microwave ovens perfectly complimented the improved availability and strength of refrigerator and freezer units, allowing for periods of long food storage followed by quick preparation. TV dinners and other ready-to-eat microwavable meals became widespread and available in any grocery store. Managing the home food supply and getting meals ready was more convenient than ever. The microwave quickly went from being a luxury to a necessity, and a staple for any complete kitchen.

Today, microwaves are as commonplace as any other household appliance, if not more so. They are usually quite affordable and come in many sizes and strengths. Residents can even get them in a variety of styles and colors to match their kitchen décor. Almost every home in the country now has a microwave, all thanks to one guy who was saving his candy bar as a snack for later.

Mike Thomas is a private contractor and writer for HomeWarrantyDeals.com. He enjoys DIY projects, college football and is also deeply passionate about restoring antique homes.

1 thought on “The Origins of the Microwave Oven: Messy and Full of Peanuts”