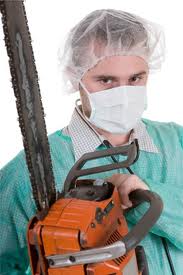 Big, bushy beards, red flannel shirts, and suspenders. The stereotypical image of the lumberjack is something that many people know. The lumberjack has two standbys in his arsenal of tree removal: the ax and the chainsaw.

The evolution of the ax makes enough sense just by looking at it – the wedge with its sharpened edge can easily be placed at the end of the long line of primitive carving tools from centuries and millennia before. But what about the electric chainsaw? How did such a strange tool come about?

Believe it or not, the modern chainsaw actually has its beginnings in medicine. John Aitken and James Jeffray were both Scottish doctors who independently invented the same basic tool in the 1780’s for the purpose of cutting not wood, but bone.

It wasn’t until the 1830’s that this design was expanded on into something more closely resembling a modern chainsaw. Bernhard Heine, a German doctor, closed the loop of the serrated chain and created a hand-cracked bone saw. Despite having created a basic, hand powered version of our modern-day chainsaw, it took nearly another century before the chainsaw as we know it was created.

Naturally, the idea was then applied for other solutions and used for more common applications, like cutting down trees.  The patent for the first electric chainsaw was awarded to Andreas Stihl in Germany in 1926. His first chainsaw weighted 140 pounds and required two men to operate it and because of the onset of the Great Depression, adoption of chainsaws was slow.

In 1927 another German, Emil Lerp, introduced the first gasoline powered chainsaw (Stihl followed with his version in 1929), though it suffered many of the same problems as Stihl’s, weighing in at 125 pounds and only usable by two men at a time.

Both men started companies to produce and sell their inventions. Lerp started his company, Dolmar, and Stihl started his company STIHL. STIHL still produces chainsaws to this day, though it was acquired by the Japanese company Makita in 1991.

Andreas Stihl’s company, despite the slow start in the 20’s, remains the top producer of chainsaws in the world to this day. Stihl’s invention is undoubtedly used by flannel-wearing lumberjacks and arborists everywhere. Today, the chainsaw is still the most dependable tool in the logging and tree care service industry.

Eric Palmer is a writer and designer in Denver, Colorado.

4 thoughts on “The History of the Chainsaw (Guest Post)”