Benjamin Franklin, one of America’s ‘Founding Fathers,’ is well known and held in high regard for his curious nature and his many inventions. A man with poor vision, he created the first bifocals by cutting two sets of lenses and putting them together in one frame. In 1752 he set out during a storm wielding a kite, and while he didn’t ‘discover’ electricity as some people mistakenly recall, he did determine that lightning was an electrical current which led him to invent a protection against it: the lightning rod. 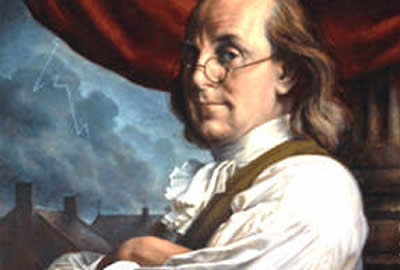 The lightning rod isn’t the only protection that Franklin had a part in creating. In 1751, in response to the threat and destruction caused by recent fires, Franklin met with members of the Union Fire Company (the first fire-fighting brigade which he had helped to create, of course) and other firefighting companies around Philadelphia met with the goal of creating a fire insurance company. Named the Philadelphia Contributionship, it was the first of it’s kind in the American colonies.

In 1752 it was determined that the insurance company would expand it’s coverage from just the firefighters to any concerned citizen of the city. 143 policies, which lasted for 7 years, were written in this first year. Interestingly, not a single one of the insured properties experienced a fire in that first year. The next year, however, saw a claim which reportedly drained the company of a third of its assets. This led to a decision in 1763 to create a single account and use the accumulated interest to pay and incurred losses, resulting in much more stability for the company. 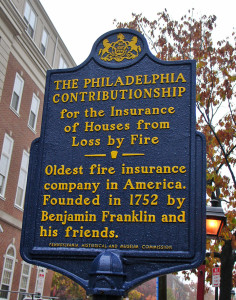 In addition to fire insurance, Benjamin Franklin was also a proponent of the creation of life insurance, crop insurance, and many others, though it was a long time before insurance became a popular idea in America, due to its relatively rural state at the time.

Franklin’s Philadelphia Contributionship was the only fire insurance company in America until 1784 and set the precedent for many companies that followed.Though the industry has changed throughout the years with our culture and activities, many of the ideas decided upon by Franklin and his partners have remained the same and continued to shape American home insurance to this day.

Eric Palmer is a writer and designer living in Denver, CO, he writes on various topics including home insurance.

4 thoughts on “The History of Home Insurance in America”