In the early 1900s, before radio and swimming pools, the arrival of the Chautauqua circuit in small-town America was as much a part of the summer experience as snow cones and roller coasters are today.

Molding the Mind of the Nation: the Beginnings of the Chautauqua Circuit 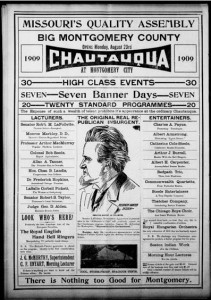 Named for the Chautauqua Lake area of New York State, the Chautauqua movement was founded in 1874, by Lewis Miller and Bishop John Heyl Vincent, as a summer retreat for Methodist Sunday school teachers. The mission of the assemblies was to provide quality religious training for community leaders. But the gatherings eventually broadened their philosophy of adult education to include an appreciation for the arts and humanities.

By 1904, independent Chautauquas took to the road as part of the larger Lyceum movement, which brought speakers and entertainers to towns across the country in an attempt to improve American intellect, morality, and society as a whole. In addition to simply engaging these communities, the gatherings marked a significant advancement in adult education in the early 20th century. They were considered by many the “school for the masses.” William Jennings Bryan once called Chautauqua a “potent human factor in molding the mind of the nation.”

But the Chautauqua movement was simply part of the larger American tradition of personal responsibility and self-improvement. Benjamin Franklin’s founding of the Junto, the establishment of the Lyceum movement, book clubs, community colleges, our current network of public museums and heritage centers, the popularity of public broadcasting–all of these institutions illustrate a national emphasis on accessible higher education. William Jennings Bryan was dedicated to the democratization of education and was an unabashed populist–so it’s no surprise that he was a firm believer in the mission of the Chautauqua.

From Chautauqua Circuit to Campaign Trail

If you mention the name of William Jennings Bryan, most students of history will first call to mind the famous Scopes Trial, the passionate “Cross of Gold” speech, or the presidential run which pitted the prairie populist against Republican William McKinley. However, throughout the early 20th century, in an era before widespread access to education, Bryan was also known as one of the most famous Chautauquans. He delivered his popular “The Prince of Peace” lecture more than 3,000 times on the Chautauqua trail.

Despite decades spent in the public eye as a political figure, being named one of the five greatest U.S. Senators of all time by a Senate Committee led by John F. Kennedy, and having a statue of his likeness displayed in U.S. Capitol, Bryan preferred the pulpit to the stump, educating to legislating. He saw himself more fit for the Chautauqua Circuit, where he spoke on virtue and spirituality, and educated audiences about political issues.

In fact, while travelling the Chautauqua circuit, Bryan would introduce “The Prince of Peace” by stating, “the most important things in life lie outside of the realm of government” and “more depends upon what the individual does for himself than upon what the government does or can do for him.”

In the same “The Prince of Peace” speech, Bryan stressed the importance of public service–a sentiment which reflected the core principles of the Chautauqua movement. Just as the leaders of the movement came together in service to improve the lives of their community members through fellowship and education, Bryan encouraged Chautauqua audiences to do the same.

…Again, Christ deserves to be called The Prince of Peace because He has given us a measure of greatness which promotes peace. When His disciples quarreled among themselves as to which should be greatest in the Kingdom of Heaven, He rebuked them and said: “Let him who would be chiefest among you be the servant of all.” Service is the measure of greatness; it always has been true; it is true to-day, and it always will be true, that he is greatest who does the most of good. And how this old world will be transformed when this standard of greatness becomes the standard of every life!

Although the popularity of Chautauquas eventually declined, the spirit of the movement and the legacy of William Jennings Bryan continue to flourish today. His dedication to personal responsibility, spiritual growth, and service lives on in all corners of the country.

A Legacy of Education and Service Lives On 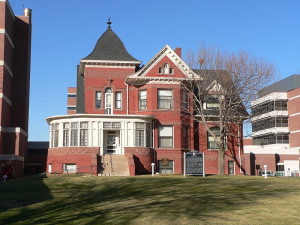 At Bryan Health in Lincoln, Nebraska, which was built on land Bryan donated to the United Methodist Church in 1922, doctors work to improve the lives of their patients.

Next door to Bryan Health Hospital, there is a museum built in his former home, Fairview, dedicated to preserving his legacy and educating future generations on the lessons that he spent a lifetime advocating.

In Dayton, Tennessee, there is Bryan College, dedicated to “educating students to become servants of Christ to make a difference in today’s world.”

As students return to school and settle into their schedules; and teachers in Lincoln, Nebraska, plan their field trips to Fairview and lesson plans about William Jennings Bryan–I hope they reflect on the lessons learned and opportunities made by possible by the Chautauqua movement and William Jennings Bryan a hundred summers ago.

2 thoughts on “The Great Commoner: The Legacy of William Jennings Bryan and the Chautauqua Circuit”