Shmuel Yosef Agnon spoke those words while accepting Israel’s first Nobel Prize (and only prize in the Literature category), the Nobel Prize in Literature, in 1966. Agnon understood that for Israel, a country roughly the size of the state of Rhode Island, size does matter. And even more important to him was humility, a mantra that the country has adopted and tried to maintain even to this day.

Agnon was born in 1888 (with the name Shmuel Yosef Halevi Czaczkes  – Agnon was but a pen name until 1924) to an orthodox Jewish family in what is now Buchach, Ukraine. His father, while trained and recognized as a rabbi, primarily traded firs to make money for the family. Unfortunately, his family couldn’t afford formal schooling so he was taught by his parents; he studied Hebrew, Yiddish, and German as well many important Jewish texts. It was in 1903 while being homeschooled when he wrote his first poem, a Yiddish poem about a Kabbalist, or a Jewish mystic.

Around Agnon’s 20th birthday, he moved to the city of Jaffa in what would later be the country of Israel. Here he began writing many of his more prominent works – “Forsaken Wives” under the moniker Agnon. He also wrote a novella during his time in Jaffa entitled “And the Crooked Shall Be Made Straight”. To fund the publication, a more prominent (at the time) author by the name of Yosef Haim Brenner sold some fancy suspenders to print 50 copies, of which only two have been located since.

In 1913, Agnon moved to Berlin where he met his wife, Esther Marx. Seven years after moving to Germany, they were wedded and had two children together.  Although the life of a writer is usually marred by financial woes, Agnon attracted the attention of Salman Schocken, a German publisher, who both published his books and allowed Agnon to write for his paper (and now one of the largest papers in Israel), Haaretz.

Unfortunately, Agnon had a fire break out in his house, burning all of his rare books and manuscripts. This is a recurring theme in many of stories. In 1924, he moved to a suburb of Jerusalem known as Talpiot and legally changed his name from Czaczkes to Agnon.

One major reason for Agnon’s prominence in Israeli literature was his use of language that was more often found in religious documents such as the Torah rather than more modern forms of dialect. Since Hebrew was a resurrected language, words for many items had to be made up by Eliezer Ben Yehuda, the lexicographer who is most associated with the revival of Hebrew. Words that didn’t exist in the bible had to be invented; instead of using these words, he would use older terms to describe the objects (hand-houses instead of gloves, for example).

Many of Agnon’s works resonated with the Zionists during the formation of the country of Israel. With his religious background, Agnon would incorporate themes of humility and perseverance, as well as a sense of ownership in his own country into many of his works. He said it best in the conclusion to his Nobel Prize acceptance speech: 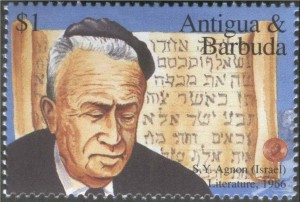 Before I conclude my remarks, I will say one more thing. If I have praised myself too much, it is for your sake that I have done so, in order to reassure you for having cast your eyes on me. For myself, I am very small indeed in my own eyes. Never in all my life have I forgotten the Psalm (131:1) in which David said: “Lord, my heart is not haughty, nor mine eyes lofty; neither do I exercise myself in great matters, or in things too high for me.” If I am proud of anything, it is that I have been granted the privilege of living in the land which God promised our forefathers to give us, as it is written (Ezekiel 37: 25): “And they shall dwell in the land that I have given unto Jacob my servant, wherein your fathers have dwelt; and they shall dwell therein, even they, and their children, and their children’s children forever.”

Guest Post Bio: David Cohen is an Israeli/American entrepreneur. You can learn more about his current business on his website, Israel Phone Rentals.