History of Home Heating: From Fire in a Cave to an Electric Fireplace (Guest Post)

It might be hard for us to envision from the relative comfort of our centrally heated, thoroughly insulated homes, but early man — perhaps the same guy who invented the wheel — had to figure out how to light a fire and use it to heat a living space.

Clearly, we’ve come a long way as a species since then, and our toasty, frostbite-free fingers are proof of that. Read on for a brief history of home heating — from the earliest cave man days to present-day zone heating solutions. 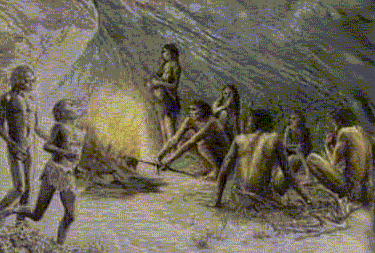 In 2012, two archaeologists from Boston University discovered evidence of a man-made fire pit dating back 1.2 million years. The advent of fire as a functional resource likely led directly to better nutrition, which in turn lent itself to great evolutionary advancements for mankind.

Eventually, man learned to build dedicated hearths; evidence of hearths has been found in the remains of Neanderthal homes dating back to 42,000 B.C. And Korean and Roman societies were using under-floor radiant heating thousands of years go. The Romans used a system of hypocausts, which pumped heated air into open spaces beneath raised buildings. Koreans used a radiant heating called “ondol” as far back as 1,000 B.C., where a wood-burning furnace at one end of the home pumped hot air through channels under the home, to a chimney on the other side. (Radiant heating is rumored to be the reason Koreans take off their shoes when entering a home and sit on the floor).

Homes in the Middle Ages were still heated primarily with fires on open hearths. All Around Roofing and Exteriors Inc explains that medieval home builders employed a clay and straw (or “wattle and daub”) home insulation technique that was both efficient and environmentally friendly; in fact, it’s making a comeback among green home builders today.

In the 14th century, European homes adopted the use of chimneys, which allowed hearths to be moved from the center of the room — below a dedicated hole in the ceiling that allowed smoke to escape — to against the wall. This represented a significant improvement in living spaces, but the popularity of chimneys spread slowly nonetheless; they were still relatively uncommon 200 years later.

Stoves and their fuel

The next major stride in home heating came with the invention of the stove in the late 17th century. Such devices became increasingly popular over the next two centuries, and those who heated their homes with stoves burned primarily wood or coal as fuel. Coal in particular generated an especially large amount of soot that would eventually prove bad for the environment; sulfur dioxide, a by-product of burning coal, is largely responsible for acid rain, and coal-burning stoves regularly left black stains on walls and ceilings.

In 1815, the first gas metering system for homes was invented, but it wasn’t fully implemented until some 25 years later in the 1840s. From there, the oil-burning furnace made its debut during the 1920s and quickly became a popular domestic heating option. Furnaces powered by electricity came along soon thereafter and rapidly gained popularity.

Today, home heating accounts for 30 percent of the energy used in the average home. Heating oil is used to heat 7.7 million homes in the U.S., with electric and natural gas fireplaces rounding out the top three most popular options. Solar heating is gaining popularity as a greener option for creating warmth within a home without having to burn fossil fuels.

The primary concern these days isn’t inventing new ways to heat homes; it’s finding better ways to hold onto that heat once it’s been generated. Advances in insulation technology are helping to keep homes warm.

Zone heating is also becoming more common, since it often makes sense to warm only the most commonly used areas of the home. Options for zone heating include space heaters, infrared heaters and electric fireplaces. For more information on zone heating, read the helpful ebook “The Cure for the Common Cold Room: A Safe & Smart Home Heating Guide.”

Mankind has made great progress in heating our homes since the days of a fire in a cave. The next time you wake up to a perfect 72 degrees in your bedroom — when it’s well below freezing outside — take a moment to thank your lucky stars that you live in the 21st century.

3 thoughts on “History of Home Heating: From Fire in a Cave to an Electric Fireplace”