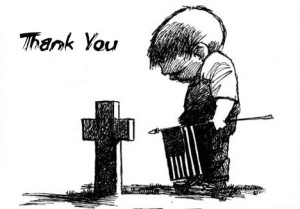 Each Memorial Day thousands of Americans take time from their hectic schedules to have a cold one, grill on the barbeque, enjoy friends and family, and launch the beginning of summer. However, many people are not aware of just what Memorial Day is all about and what is behind this holiday.

A few years after the end of the Civil War, a group called the Grand Army of the Republic (GAR) felt that there should be recognition to the fallen Union soldiers of the Civil War. The group created Decoration Day, where they would decorate the headstones of the fallen soldiers of the Civil War with flowers. It was not until after World War I that all veterans, those which had died in service to their country, were included in the Decoration Day ceremonies. Decoration Day continued as the name of this day of remembrance of those until sometime after World War II when it was renamed to Memorial Day as we know it. Memorial Day was celebrated on May 30th until 1968, when the government passed the Uniform Holiday Bill, which set the day of the holiday as the last Monday in the month of May.

For the last forty-five years, we have taken this day and remembered those that have fallen from the days of the Civil War, both World Wars, the conflicts in Asia, and the modern conflicts of today. However, sadly I feel we have forgotten the true meaning of this day. Even as a member of the military I think, sometimes, we are more concerned about our three-day weekend and often forget about those that have fallen. It is not about the time off, but a time to reflect on those that have gone before us.

One experience of mine that I believe puts Memorial Day truly into perspective was a visit to Normandy, France, with my family. I was given the name of the cemetery caretaker by a friend and was told to look him up when I arrived to the cemetery. Upon my arrival to the cemetery, I located the administration building and the man to whom I was told to meet and introduced myself. He seemed elated that I came by and you could tell by the enthusiasm in his voice and his body language that he enjoyed giving my family and me the history of the cemetery and the area around Normandy. After our conversation, he said he had a request of me and my family and asked if we would accompany him to the front of the cemetery as he played Taps over the loud speakers.

I was honored that he asked this of us. We followed him to the front of the cemetery, however, were not ready for the flood of emotion that was about to occur. We had never visited Normandy so this was the first time we had gazed upon the awe-inspiring site of those that had given the ultimate sacrifice. I have to say, in my career, this is the most surreal event I’ve experienced in my twenty-three years of service. The cold wind whipped at our faces from the English Channel, the notes of taps began to play, and my family and I observed the sea of marble crosses. My mind began to meditate on those that lay before me who had not returned home from the shores where I stood, at attention and saluting. As I looked at my family, I could see that my young son and daughter had placed their hand over their heart, since in their minds when dad saluted this was what they were supposed to do, and tears were running down my wife’s cheek. It was at this point in my life I finally understood the quote “All Gave Some, But Some Gave All”.

The song ended and the caretaker asked me to hold on, he wanted to retrieve something for me. As he returned, he had in his hand, an American and French flag. He handed the flags to me and told me that they are normally reserved for distinguished visitors and family members of the fallen; however, he wanted me to have them to remember our trip to Normandy. We exchanged farewells and continued with our tour of the cemetery. I will never forget that day at Normandy. Today those flags continue to travel with my family and I from assignment to assignment in the Air Force. I will always have a deep respect for my brothers and sisters who have lost their lives for freedom when Memorial Day comes around.

Finally, As you go out and enjoy the festivities of this Memorial Day weekend, remember that it is more than just a summer day celebration, but a day to commemorate and remember those that have given the ultimate sacrifice to this country that we call home.