I was sent an article from a reader which I couldn’t help but sharing–World War II’s Strangest Battle: When Americans and Germans Fought Together. This interesting tale is the only recorded time that American and German  troops fought together in World War II. It is a wild–and almost unbelievable–story that you have to check out for yourself. 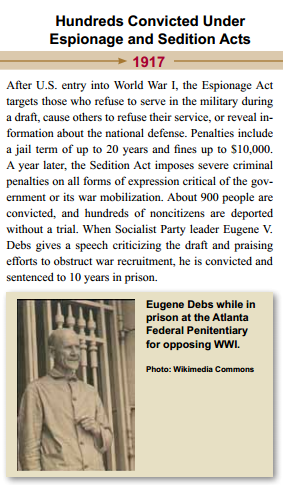 In research for an essay comparing and contrasting the Executive branches during the American Civil War and World War I, I ran across this insightful timeline. This timeline provides an easy to interpret look at civil liberties–or lack thereof–during periods of war, in American history. In past years we have dealt with loss of privacy, the violation of our constitutional rights, and unwarranted pat-downs from TSA agents. We try to tell ourselves, “This is for our own good. I am willing to endure ‘naked body scanners’ if it means that I can safely fly from point A to point B.” I am guilty of this as well, but it is good to look back over our shoulders (every once in a while) and see the correlations as history unfolds.

In a “too soon” moment, a German opera house has announced that it will be cancelling its Nazi-themed production of a Wagner opera. This opera, having run for less than a week, was cancelled because of the audiences’ complaints about scenes portraying the gassing of Jews. It was reported that the “scenes were so upsetting that some audience members sought medical help following early performances.” So, if you are a fan of Richard Wagner and his operatic masterpiece Tannhäuser, this bit of historical news might be right up your alley.

The last bit of history from the web is an article from DuckRabbits. In his article, Ancient Aliens (and a defense of mythology), the author gives his opinion about History Channel’s Ancient Aliens. The article covers the theory of ‘ancient aliens,’ as well as the possible misinterpretations of gods and angels–you know, the gods and angels that were really aliens… It is a well written article and a great defense of mythology.

2 thoughts on “History from the Web”