Part of why I write at Hankering for History is that I love sharing. I don’t just like sharing what I’ve learned, but also what I run across on other websites. Whether it’s a video clip, an article, breaking-news, or someone selling history doodads online, I want you guys to know about it as well. It’s time, for History from the Web! Last week Nick Shepley, a frequent guest contributor, emailed me and told me that he was “looking for three exceptional history writers to join the team and help create ebooks.” So, if you have every thought you might want to write history ebooks, here is your chance. I asked Nick to put together a little blurb and here is it! 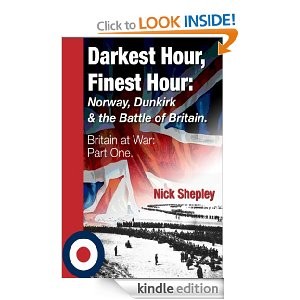 Explaining History started out as my labour of love, I am a history teacher determined to map the whole of the 20th Century in 100 ebooks which charts the story of mankind over a 100 year period. Recently the ebooks evolved into their own ebook brand and then became a publishing imprint in its own right and now I am looking for writers to help develop the brand. At the moment there are two imprints I am developing are: 1) 20th Century Lives, a series focusing on influential figures from politics, culture, science and warfare.

2) The Century Series, looking at broader thematic approaches to 20th Century history, planned titles are The Communist Century, The Psychoanalytic Century and the Post Imperial Century. All ebooks are 25,000-35,000 words and I take care of artwork, marketing and everything bar the writing. If you are interested you can get me on info@explaininghistory.com.

In a society where we get our news in the form of Facebook statuses and 140 character Twitter messages, I am inspired when I see that people are interested in writing lengthy articles or producing hour long podcasts. I stumbled across a website the other day that has excellent historical podcasts.

Angry History Podcast reminds me of NPR’s Car Talk. The rant-like banter between the two host of Angry History, Owen Moogan and Dean Karayanis, is both excellent and informative. These two work to “expose, correct, and dissect history bungles.” There is not really more I can say about the show except that you need to check them out.  I’ve listened to the first three episodes and these guys will be keeping me company on my drive to work. We’ve all heard of the Little Rock Nine, however, most people are not aware of the first stand in the small town of Hoxie, Arkansas. Below is the trailer to short documentary on the town that served as the first battlefield to implement the Brown v. Board of Education school desegregation decision. If you are interested in watching the entire documentary, you can find it here. Additionally, here is a link to the full transcript.

5 thoughts on “History from the Web”