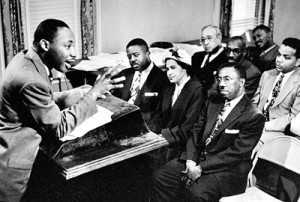 On December 5, 1955, ninety percent of the city’s blacks boycotted the buses. Having seen the boycott as a success, thousands went to the meeting later that night at Holt Street Baptist Church. This meeting would be to determine whether or not the boycott would continue. As the congregation unanimously voted to continue the boycott, they determined that they would need an organizing force to serve as leadership for the movement. The Montgomery Improvement Association was thus created and comprised of eight named officers; of these Dr. Martin Luther King, Jr. and E.D. Nixon were elected as president and treasurer, respectively.

The Montgomery Improvement Association provided organization that a group with a mob-like mentality could not provide. This eight-person committee—combined with the MIA Executive Board (thirty-five men and women)—offered not only organization, but also pushed for the movement to focus on Christian-like values—specifically their “passive resistance doctrine” of non-violence.

With such leadership, whites began to take notice of blacks and their ability to organize in Montgomery. One member of Montgomery’s White Citizens Council stated that the Montgomery Improvement Association moved with “military precision.” Dr. King saw it as a “once dormant and quiescent Negro community…now fully awake.” The MIA was responsible for many successful operations; however, their greatest feat was the “private taxi” system. This complex system, of privately owned vehicles and church vans, was established to ensure those unable to walk to work were provided rides.

While the Montgomery Improvement Association could not have achieved all that it did without its strong leaders—such as King and Nixon—these leaders alone were not enough to instill the black community with the power to triumph against discrimination and the struggles ahead.