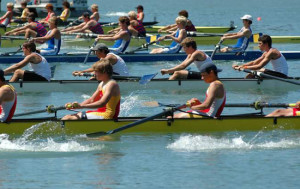 Rowing may not seem like the most interesting sport in history; however, it, more than any other collegiate sport, has had the largest impact on American sports. While baseball is known as America’s pastime and football is now the most watched sport on television, college sports and athletes have a special place in our hearts. There is something about watching an athlete at their prime, giving one-hundred and ten percent, and not playing for millions of dollars that has enthralled the American nation. Not only are Americans enthralled, but are financially invested as well. In 2012, the National Collegiate Athletic Association (NCAA) generated 871.6 million dollars in revenue. In fact, there are entire television networks primarily dedicated to college sports: Big Ten Network, CBS Sports Network, ESPNU, Fox College Sports, and the Pac-12 Network.

So where does rowing fit in? 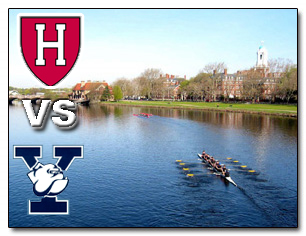 In 1852, Harvard University and Yale University met in what is now held annually under the name the “Harvard Yale Regatta.” The Harvard Yale Regatta, originally raced on Lake Winnipesaukee, New Hampshire, is now raced annually on Thames River, New London, Connecticut. In the first race, on August 3, 1852, Harvard, racing Oneida, bested Yale’s Shawmut by two lengths. This first Harvard Yale Regatta marked not only the first in a long-standing tradition between Harvard and Yale, but as the first American intercollegiate sporting event, ever. The first intercollegiate baseball game would not occur until July 1, 1859, (Amherst College vs. Williams College) and the first intercollegiate football game would not take place until November 6, 1869, (Rutgers College (now Rutgers University) vs. College of New Jersey (now Princeton University).

So, with rowing as the forerunner of collegiate sports, how is it that in Wikipedia’s 8,750 word article entitled “Sports in the United States,” not once is rowing mentioned. The article covers the history of Olympics, motor sports, American football, baseball, basketball, ice hockey, and soccer. The article also mentions equestrian competition, boxing, wrestling, water polo, rugby, bowling, lacrosse, cricket, ultimate frisbee, roller derby, dodgeball, and curling. I could go on and on. The article mentions dozens and dozens of sports; however, not a single use of the word row or rowing can be found.

How is it that the athletic event that sparked a fervent organization, in this case the NCAA, has left no mark on history? While I understand that Wikipedia is not the end-all-be-all of resources, it serves as the majority of Americans’ reference guide.