If I told you that I was going to travel from one end of Memphis to the other end, in a vehicle with a 90 cc, 1.5 hp, four-stroke engine, you would probably fear for my safety. In fact, with the current city speed limits, I probably could not legally complete this task. However, in 1903, George Wyman completed a tremendous feat while riding a vehicle with those exact specification–a feat of transcontinental proportions!

The specifications of the California machine allowed George Wyman to travel at a speed of twenty-five (25) miles per hour. As you can see from the picture above, there wasn’t a lot of room to bring luggage. He took with him a set of warm clothing, money, a water bottle, cans for spare oil and gasoline, a Kodak Vest Pocket camera, a cyclometer, various bicycle tools and spare parts, and a long-barreled .38 Smith & Wesson revolver.On May 16, 1903, George Wyman headed east, on his 1902 California machine, and achieved an accomplishment worthy of national recognition. On July 6th, just fifty-one days later, George Wyman arrived in New York City, completing a transcontinental crossing of America. Upon the completion of his trip, George Wyman became recognized as the first person to make a transcontinental across the United States by motor vehicle.

Wyman’s California motorbike broke down several times along the way; one of these breakdowns caused a five-day delay. The last of these hindrances occurred in Albany, New York. Just one-hundred and fifty (150) miles away from his final destination, New York City, Wyman decided to pedal his motorbike the rest of the trip. On July 6, 1903, George Wyman became the first person to make a transcontinental crossing of the United States by motor vehicle. While Wyman was ecstatic, there were those who weren’t thrilled.

The conclusion of his trip was sad realization for two men, Horatio Jackson and Sewall Crocker. Horatio Jackson, a physician, and Sewall Crocker, a mechanic, would lose claim to “the first person(s) to make a transcontinental crossing of the United States by motor vehicle” by twenty days. On July 26th, having left on May 23rd, the pair arrived in New York City. Completing the trip twenty days after George Wyman, they could not claim to the first motor vehicle; however, they did make their mark on history by being the first people to cross the country by automobile. 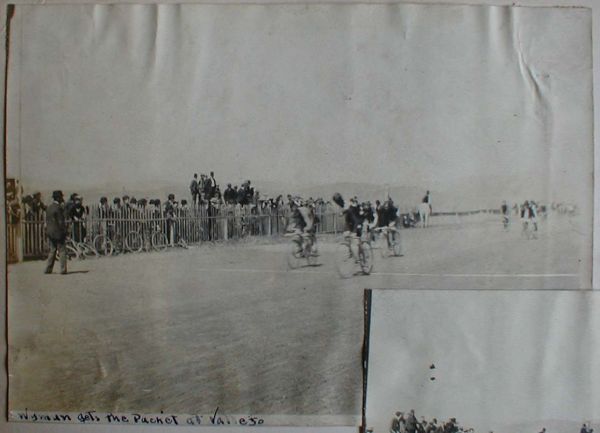 What I find most interesting, and possible more impressive is an accomplishment of George Wyman’s before he was labeled as the first person to make a transcontinental crossing of the United States by motor vehicle. Before his trip in 1903, Wyman had only ridden a motorized bicycle for about a year. What initially got him involved with motorized bicycles was his accomplishments and experiences on a regular bicycle.

Wyman, like most of the world, got swept up in all the bicycle hysteria of the 1880s and 90s. In the 1890s, Wyman moved to Australia to pursue a career as a professional bicycle racer. After Australians Arthur Richardson, Alex White, and Donald Mackay completed their 11,500 mile trip along the perimeter of Australia, George Wyman knew that this was an enterprise worthy of his time and skill. Upon Wyman’s attainment of this noble quest, he became the first American to circumnavigate Australia on bicycle.

It makes you wonder. How does someone who actually pedaled a bicycle over 11,000 miles later become the man who received recognition for riding a motorized bicycle 3,800 miles? I certainly believe that his earlier feat should definitely trump the later.

1 thought on “George Wyman and His Transcontinental Crossing”