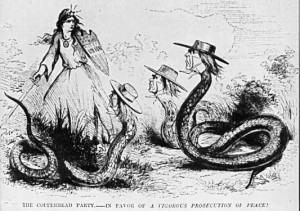 We’ve covered the American president that committed the “the most damnable outrage that has ever been perpetrated;” however, we haven’t covered the president that was a “worse tyrant and more inhuman butcher than has existed since the days of Nero.” During the American Civil War, Marcus M. “Brick” Pomeroy, the editor of La Crosse Democrat, published numerous scathing articles against President Abraham Lincoln. The aforementioned quote would be just one of the attacks orchestrated by Marcus Pomeroy. You would expect to see that amount of disdain towards President Lincoln published in the South, but La Crosse Democrat was published in the North. La Crosse Democrat, like many northern newspapers, was controlled by members of the Civil War Copperhead political group. Wikipedia defines a Civil War Copperhead as:

Copperhead (n): “a member of a vocal group of Democrats located in the Northern United States of the Union who opposed the American Civil War, wanting an immediate peace settlement with the Confederates.”

Copperheadism was a short-lived attempt to end the Civil War, and it quickly died down after the fall of Atlanta, in 1864. What I found most impressive was the way that this movement took control of the press. Some of the more notable papers that were under the control of Copperheads were the Chicago Times and the New York Journal of Commerce. In fact, the Chicago Times was such a vehement critic of President Lincoln that Union General Ambrose Burnside closed the newspaper down for two days. It was not until national outcry against the suppression of freedom of the press that President Lincoln lifted General Burnside’s ban of the paper.

Another aspect of Copperheadism that I thought particularly interesting was the exile of Clement L. Vallandigham. Clement Vallandigham was an Ohio Congressman and one of the leaders of the Copperheads. On April 13, 1863, General Burnside issued General Order Number 38. This order forbade the criticism of the war within the Department of the Ohio. 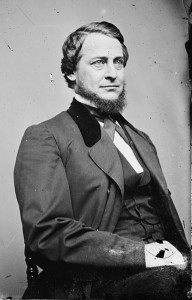 “That hereafter all persons found within our lines who commit acts for the benefit of the enemies of our country, will be tried as spies or traitors, and, if convicted, will suffer death…The habit of declaring sympathies for the enemy will no longer be tolerated in the department. Persons committing such offences will be at once arrested, with a view to being tried as above stated, or sent beyond our lines into the lines of their friends.”

Not only did this order not slow down the Copperhead movement, but in the case of Clement Vallandigham it fueled the fire. Now Vallandigham could criticize not only the war, but also General Order Number 38; and for this act, he was arrested. He was tried by Military Commission and was found guilty of “publicly expressing, in violation of General Orders No. 38, from Head-quarters Department of the Ohio, sympathy for those in arms against the Government of the United States, and declaring disloyal sentiments and opinions, with the object and purpose of weakening the power of the Government in its efforts to suppress an unlawful rebellion.”

On May 19,1963, President Lincoln ordered the deportation of Clement Vallandigham and he was escorted to the Confederate border. While the story could end here and be strange enough, it continues. After being exiled from his country, and forced into the Confederacy, Vallandigham’s travels took him through Virginia, then to Bermuda, and finally landed him in Canada. From Ontario, he declared himself as a candidate for the 1863 Ohio gubernatorial election. The Ohio Democrats, not pleased with President Lincoln’s deportation of Vallandigham, confirmed Vallandigham as a Democratic candidate with a 411-11 vote. Unfortunately Clement Vallandigham lost by a vote of 288,374 to 187,492 to pro-Union War Democrat John Brough. While not victorious, it makes for an interesting tale.

4 thoughts on “A Nasty Bite from a Civil War Copperhead”