I started a new series on the site based on the book 1,001 Things Everyone Should Know About American History by historian John Garraty. If you haven’t already, check out the first post in the series–His Accidency. Facts number 61-72 are Civil War nicknames. The list is as follows:

Some of these nicknames are well-known and will come as no surprise to you. 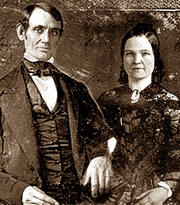 “Honest Abe” and “Father Abraham” are both nicknames for President Abraham Lincoln. Abraham Lincoln became known for his honesty long before he became a politician. While there are numerous tales as to how he received the nickname of Honest Abe, Father Abraham is more interesting to me. Not that the nickname Father Abraham in and of itself is interesting, but the meaning behind it. Also, the fact that the book mentions the name, but offers up no explanation seems strange. (Pictured right)

As best as I can tell, Lincoln received this nickname because he led the nation as Abraham led his nation in the Bible. I find it odd because it is well know that Abraham (from the Bible) had hundreds of slaves. As an owner of slaves, purchased with his own money, I would think it unwise to nickname President Lincoln after this man.

“Unconditional Surrender” was the nickname of Union General Ulysses S. Grant. This nickname originated when he sent word to Confederate General Simon Bolivar Buckner that “no terms except an unconditional and immediate surrender can be accepted. I propose to move immediately upon your works.” As the Battle of Fort Donelson, which ended on February 16, 1862, was one of the Union’s first victories, word of it spread quickly and the U.S. in General U.S. Grant quickly became known as Unconditional Surrender.

“Stonewall” was the nickname of Confederate General Thomas J. Jackson. I had always heard that Stonewall Jackson received his nickname because he and his troops offered up a tough defensive barrier, stonewalling the Union troops. However, I am now finding out that there could possibly have been two meanings to the nickname “Stonewall.” The popular version which is a good nickname and flaunts General Jackson’s abilities, and the second is to assume that General Jackson was of no help–that Jackson was merely “standing there like a stone wall!”

“Little Phil” was the nickname given to Union General Philip H. Sheridan. No story here–General Philip Sheridan was really just a little guy, only 5 feet 5 inches tall. He was described by Abraham Lincoln as “a brown, chunky little chap, with a long body, short legs, not enough neck to hang him, and such long arms that if his ankles itch he can scratch them without stooping.”

“Beast” was the nickname given to Union General Benjamin F. Butler. This nickname was not one gained for heroism on the battlefield, but for the proclamation he passed while acting military governor and commander of the city of New Orleans. It was here that he issued Order 28 which gave soldiers the right to treat women like prostitutes. Men and women of the South were so insulted that they started calling General Butler “Beast.”

“As the officers and soldiers of the United States have been subject to repeated insults from the women (calling themselves ladies) of New Orleans in return for the most scrupulous non-interference and courtesy on our part, it is ordered that hereafter when any female shall by word, gesture, or movement insult or show contempt for any officer or soldier of the United States she shall be regarded and held liable to be treated as a woman of the town plying her avocation.”

“Fighting Joe” was the nickname given to Union General Joseph Hooker. I hardly see why this nickname is worth mention. General Hooker received this nickname not for any action, but purely on the fact that the New York Courier and Enquirer made a typo and instead of reading an incoming transmission as “Fighting–Joe Hooker Attacks Rebels” it was relayed as “Fighting Joe Hooker Attacks Rebels.” He was never very fond of the nickname and hardly deserved it. 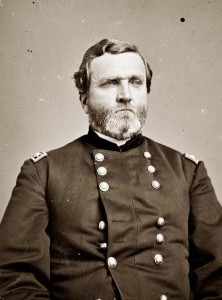 “Slow Trot” and “Rock of Chickamauga” are both nicknames for Union General George H. Thomas. General Thomas received the nickname “Slow Trot” because of the speed with which he organized for battle. He was an excellent tactician; however, for the troops it was a slow and careful process that took entirely too long. General Thomas received the nickname “Rock of Chickamauga” due to his ability to endure the onslaught which the Confederacy unleashed at the Battle of Chickamauga. While the battle ended in a victory for the Confederacy, General Thomas and his men stood their ground much longer than were expected of them.

“Young Napoleon” was the nickname given to Union General George B. McClellan. Where all the above mentioned nicknames were given in a loving manner, or out of fear, “Young Napoleon” was not. It was thought that General McClellan resembles Napoleon Bonaparte, not only in physical appearance, but in his inflated sense of self-worth and importance. Funny, even today calling someone Napoleon is no compliment.

“Napoleon in Gray” is not very original in its origin. Confederate General Pierre G. T. Beauregard was both of French descent and very skilled in planning and executing military tactics, as was Napoleon Bonaparte. Seeing that General Beauregard fought for the Confederacy and had gray uniforms…you get the picture.

Lastly, the “Copperheads” were Northern Democrats that opposed the Civil War and wanted to end it. Whether the issue of slavery was decided, let alone ended, was of no concern. This group was very concentrated in some areas and were against President Lincoln. The Copperheads were an interesting political group that was most famous for their use of the press. For more on that check out A Nasty Bite from a Civil War Copperhead.