Until the Spanish invasion of 1519, the region that is now Mexico was largely isolated from much of the rest of the globe. The area was part of Mesoamerica, a geographic region populated by multiple indigenous peoples who shared similar cultural traits. Mesoamerica extended from Mexico down into Central America. Over the centuries, the land that became Mexico had been home to a variety of civilizations and cultures including the Maya, Olmec, Toltec, Aztec, Zapotec, and Mixtec. While this area had evolved without any influence from outside the Americas, much of the rest of the world had already become tightly connected by trade routes and colonization into a complex political and economic system.

When Spanish conquistador Hernando Cortes first stepped foot on the Yucatan Peninsula in 1519, it was the beginning of the end for the region’s existing way of life. The Spanish quickly recognized the economic value the area could bring, and began an effort to conquer and control an ever-expanding amount of North America and Central America. Within a few years they had conquered much of the Aztec Empire. They claimed the territory as part of New Spain.

Under Spanish rule, the resources and people of New Spain were used for the economic benefit of Spain. A class system developed, with the status, property, and wealth residing primarily with the Spanish and not the native peoples. Over time, two other groups developed: the Mestizos, those of mixed Spanish and indigenous descent, and the Creoles, those of Spanish descent born in New Spain. 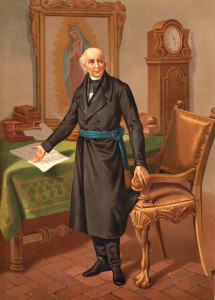 Following in the footsteps of the French and American Revolutions of the late 18th century, and fueled by the class structure inequities, the independence movement in Mexico gained momentum. In 1810 Miguel Hidalgo y Costilla, a priest, declared independence from the Spain and led an uprising. Though Hidalgo was killed less than a year later, the fight for independence continued.

Ironically, Mexico gained independence from Spain not just through a republican revolution but through political maneuvering by those who held power in New Spain and did not want to lose it. Fearing that some recent political changes in Spain would disrupt their way of life, some conservative factions joined forces with one of the leaders of the rebellion and agreed on a plan for Mexican independence. Spain agreed to the terms, and in 1821 Mexico gained its independence.

The years after Mexican independence were very chaotic. From 1821 to 1876, dozens of different governments and factions ruled Mexico. The country was ruled by a frequently changing mix of dictatorships, monarchies, and republics. Most of the governments supported the class system and helped ensure elite dominance over the lower classes and indigenous peoples.

While Mexico struggled to establish itself as an independent country, the growth of its neighbor to the north threatened its northern territory. In 1836, Texas successfully won independence from Mexico after defeating the army of Mexican general Santa Anna. Territorial tensions rose between Mexico and the United Stated, fueled by the 1845 annexation of Texas by the United States, the U.S.’s desire to acquire California and New Mexico, and military presence in disputed Mexico-Texas borderlands. This led to the Mexican-American War, which started in 1846 and ended in 1848.As a result of the war Mexico lost two-fifths of its territory to the United States, including large areas of the present-day states of California, Nevada, Utah, Arizona, New Mexico, and western Colorado.

Today Mexico is a federal republic composed of 31 states and the Federal District. It is governed under a constitution first established in 1917, as part of the Mexican Revolution which occurred partly in response to continued class inequities. Far from its isolated past, Mexico is now inextricably tied into the global economy. It has a gross domestic product of (GDP) of over $1.7 trillion, giving it the 12th largest GDP in the world. Major economic sectors include manufacturing, tourism, and petroleum. Mexico benefits from being a member of over 50 free trade agreements, which cover over 90% of its total trade.

Nancy Buchanan is the Head Librarian at Questia, where you can find additional resources on Mexican history.