Commercial trucking has been the backbone, the heartbeat and the lifeblood of consumer economics in the United States for the past century. Delivering everything from fresh produce to heavy machinery, truckers make it possible for Americans throughout the country to buy goods from all over the world at any time—often for insanely low prices.

In the prosperous 1920s that marked the post-WWI era, Americans honed some serious machine-building skills, which enabled consumer retail to flourish. Advances in mechanical technology and transportation infrastructure (roads, bridges and interchanges) were triggered by military needs during the war and enabled motorized vehicles to haul more freight for longer distances than ever before. This meant stores could stock commodities from anywhere in the country and maintain sufficient inventory to satisfy growing consumer demand.

Standard Class “A” Truck for the U.S. Army during World War I

Later, improvements and the proliferation of the automobile in the years following WWII led to a major population shift. The family automobile—along with the ability for trucks to navigate country roads and deliver goods to scattered locations instead of relying solely on train deliveries at centralized stops in big cities—made it appealing for people to move from the city to suburbs.

The emergence of the computer chip also had a dramatic impact on the trucking industry by helping drivers better manage speed, temperature, steering and braking functions. GPS navigation further enhanced the trucking business by giving dispatchers a way to monitor the location of company vehicles and helping truckers find the best routes.

Paving the road for freight

Before large volumes of perishable material could be moved from one area to another location far away, a reliable system of transportation had to be developed. Travel on the dirt postal trails that served as roadways in many areas before WWI was unpredictable and slow, especially when the trails became bogged with mud. Keep in mind that the journey from Boston to New York at this time was considered a very long trip and could take up to three days.

Road paving projects began in the 1920s, but the Interstate Highway System we know today didn’t emerge until 1956, when President Eisenhower authorized the Federal Aid Highway Act. This changed everything. Suddenly, trucking was more efficient and could compete with railroads for transporting freight. This is when the business of trucking really took off. 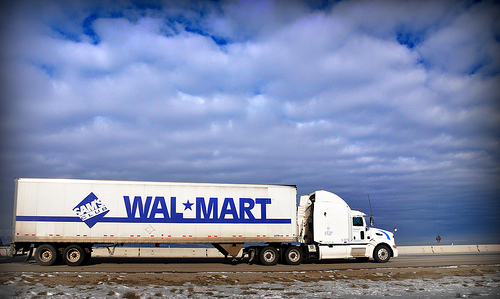 The impact of this innovation is the rise of mega stores such as Wal-Mart and Costco that offer low-cost goods from everywhere in the world, which just wasn’t feasible before the development of standardized freight containers. Because truckers had to sit for hours while people loaded and unloaded individual crates from one truck or transportation mode to another, long-distance, multi-mode transport was an extremely slow, labor-heavy and expensive process.

The next time you shop, keep in mind that any business that relies on transporting goods to markets—as well as the events, people and entities who need ingredients, materials and products to live or operate their own businesses—are affected to varying degrees by innovations and historical events that impact trucking. And when you wonder about the cost of the things you buy, remember that transportation costs include fuel prices, technology investments, insurance fees and vehicle maintenance spending as well as the salaries of drivers, dispatchers, fleet managers and others. These transportation costs are included in the price of goods.

Danielle is a part-time student at The Kelley School of Business studying marketing and supply chain management. Her fascination with history, particularly Native American cultural studies, is a time-consuming hobby that’s led her on many travels and caused her personal library to grow in excess of 250 books. Contact her on Twitter to discuss logistics and transportation, history, or cat videos.