Yesterday I wrote an introduction, more or less a summary of events leading up to Kristallnacht. If you have not already, check it out before going any further.

As Propaganda Minister Joseph Goebbels concluded his speech, it was only a matter of hours before the attacks on Jewish properties started. By 10:30 p.m., on November 9,1938, Nazi Gauleiters started rioting in Germany.  By 2:00 a.m., officers from the Gauleiter, Schutzstaffel, Sicherheitspolizei, and Sturmabteilung were all involved in the mass destruction that would take place. Surprisingly, an unexpected amount of German citizens partook in the violence that would ensue and become bane for the Jewish population. Hugh Greene, a reporter who witnessed the events taking place in Berlin, Germany, wrote this:

Armed with sledgehammer and axes, citizens and Nazi party members took to the streets wielding these weapons like maniacs, shattering every Jewish storefront in Germany and parts of Austria.

Once pandemonium had erupted, Reinhard Heydrich, one of the main architects of the Holocaust and the individual who Hitler bestowed the nickname “the man with the iron heart”,  sent a telegram to Nazi officials with specific instructions regarding the riots. The instructions were strict and very simple: 1) Offer protection to foreigners and businesses of non-Jewish relation, 2) German police were not to interfere, unless rule #1 was broken, 3) Seize all Jewish archives from Jewish organizations, and lastly 4) Arrest and detain all “healthy, male Jews, who are not too old,” for transfer to concentration camps. And this they did. 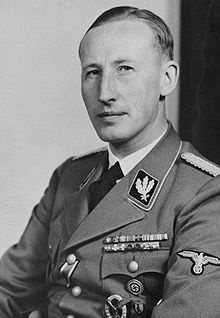 Over 1,000 synagogues were attacked and over 7,000 Jewish businesses were destroyed. With all of the attacks on storefronts–which all had plated glass windows–there was a continual, deafening sound of glass shattering throughout the night and into the morning. This led to the naming of the event as Kristallnacht, which literally means, crystal night. Once the Nazi and the misguided citizens of Germany had inflicted all the damage they possibly could, they arrested over 30,000 Jews and sent them to concentration camps.

As if this two-day riot of destruction and attempted annihilation of all things Jewish wasn’t enough, the Germans forced the Jews to pay “judenvermögensabgabe” which was a collective fine of one billion marks for the murder of Ernst vom Rath. (That is the equivalent of 5.5 billion US dollars.) Additionally, a majority of the insurance claims to fix the Jewish establishments were to be paid to the German government as “damages to the German Nation.”

Kristallnacht was the foreshadowing of the mass carnage that was to come; it was a first glimpse of the true plans of Hitler’s Nazi party. In this single event the German’s persecution towards the Jews had changed from one of economic, political, and social persecution to persecution based on physical violence, incarceration, and genocide.

Within the ten months that would follow Kristallnacht, 115,000 Jews would emigrate from Germany and Austria. As part of government policy, the Nazi party would claim all of their properties and belongings left behind. Because of this two-day riot, the Nazis achieved several goals that would prove advantageous. The confiscation of Jewish belongings and property brought considerable wealth to the Nazi party, most importantly for the funding of military. More important, however, was the accepted change of antisemitic policy.  As no other countries took a stand for the Jews and the German nation was not in complete uproar, the former policy based solely on discrimination could now be one of physical violence.

On November 12th, just two after Kristallnacht, Hermann Goring, a Nazi leader best known for his command of the Four Year Plan (not to be confused with America’s New Deal, which was also a four-year economic plan in the 1930’s), met with high-ranking Nazi officials and delivered the following as a part oh his address:

I have received a letter written on the Führer’s orders requesting that the Jewish question be now, once and for all, coordinated and solved one way or another… I should not want to leave any doubt, gentlemen, as to the aim of today’s meeting. We have not come together merely to talk again, but to make decisions, and I implore competent agencies to take all measures for the elimination of the Jew from the German economy, and to submit them to me.

This would mark the beginning of the Holocaust.

2 thoughts on “The Night of the Broken Glass”