Kristallnacht, or more commonly referred to as the Night of the Broken Glass, was–without a doubt–the single most significant event that lead to the inception of the Holocaust. For several years up to this point, Jews, in Germany, had been persecuted, harassed, and treated unfairly. Through the Nazi’s propaganda and hostile Sturmabteilung (SA) paramilitary, Jews were the subject of constant economic, social, and political persecution.

It it important to understand that at this point in Nazi-Jew relations, that while several German laws were implemented to make their lives unbearable, Germany had not yet started the slippery slope that would become uncontrollable violence. This would occur on November 9th, 1938.

Lets go back, just a bit, to ensure that everyone fully understands the events that led to Kristallnacht.

In August of 1938, German authorities declared that all foreigners’ (including German-born Jews of foreign origin) residence permits were being cancelled and that they would have to renew them. This was implemented in hopes of mass emigration. (Do not confuse this with immigration! If you don’t know the difference, look it up!) When the passing of this law did not meet the expectations that Hitler and the Nazi party had hoped for, more aggressive actions were needed.  On October 28th, Hitler gave orders to gather up more than 12,000 Polish-born Jews and force them into Poland. Nazi authorities showed up at their homes, immediately ordered them out of their houses, and only allowed them to bring one suitcase, in which they were to bring their personal belongings. The Jews were placed on trains and sent to Poland. Unwelcome at the border, the deportees were stuck out in harsh conditions waiting for Poland to allow them entry.

One of the families that was torn from their home, forced to leave their belongings, and dumped off at the border was the Grynszpan family. Berta Grynszpan sent her brother Herschel, who was staying with family in Paris, France, a postcard. On the postcard she described the horrific events and informed him that they were penniless and that they needed money. Receiving the postcard late on a Friday, he was forced to wait until the following Monday (the next business day), the 7th of November, before taking action. On November 7, 1938, Herschel Grynszpan purchased a revolver and went to the German embassy in Paris, requesting to meet with an embassy official. He was taken to the office of German diplomat Ernst vom Rath. Upon entry into his office, Hershel pulled out his weapon and shot Ernst vom Rath three times, severely wounding him. Upon his arrest, he was found to be carrying a postcard, addressed to his parents, which said the following, “May God forgive me…I must protest so that the whole world hears my protest, and that I will do.”

In response to a Jew attempting to murder a German official, Germany took its first punitive steps in response to the shooting. Immediately, Jewish publications were to cease. Not a single Jewish newspaper, magazine, newsletter, or bulletin was to be published. This was intended to stop all communication, leaving the Jewish population in the dark. With the continual passing of legislation, this last act signified the stripping away of the Jews’ last rights as citizens.

While Hitler and several key members of the Nazi party (most notably Walter Buch, Joseph Goebbels, Reinhard Heydrich, and Heinrich Himmler)  were celebrating at a dinner to commemorate the 1923 Beer Hall Putsch, Hitler received news that Ernst vom Rath has passed away as a direct result of his severe wounds, which had been inflicted by a Jew, Herschel Grynszpan. After a heated discussion, Hitler stormed out and Propaganda Misister Joseph Goebbels delivered this message:

The Fuhrer has decided that demonstrations should not be prepared or organized by the party, but insofar as they erupt spontaneously, they are not to be hampered.

Most everyone agreed that the message was clear and that they had just been commanded to organize a pogrom. (Another good word to look up if you are not familiar with it!) 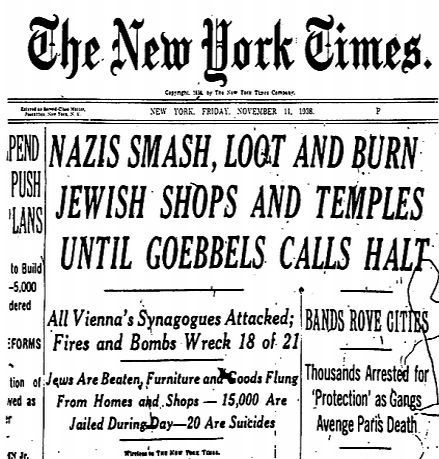 Stick around until tomorrow, and we will get into the actual event of Kristallnacht.

Feel free to +Follow so that you will be immediately notified when the second part is complete.