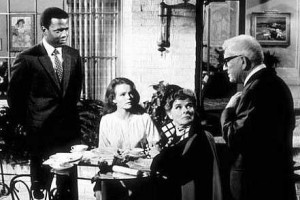 Guess Who, a comedy starring Bernie Mac and Ashton Kutcher, came to theaters when I was in high school, in 2005. The movie’s plot seemed funny enough; a black father had to come to grips with his daughter bringing home her white fiance to meet the family. It was funny, but it didn’t seem like a big deal to me. It wasn’t until the next day that my father told me about the significance of the movie. Guess Who was a spin-off of Guess Who’s Coming to Dinner.

In Guess Who’s Coming to Dinner, the races were swapped and a white girl brought home a black boy to introduce to her family–as her fiance! In 1967, the year this original movie came out, I can imagine a white father would have been overwhelmed with having to deal with this. At the height of the National Civil Rights era, this movie was more than a comedy, it was pertinent to its times. While this movie was being shot, the United States Supreme Court was deliberating on Loving v. Virginia (1967). In Loving v. Virginia (1967), the U.S. Supreme Court unanimously determined that the Racial Integrity Act of 1924, which prohibited marriage between people classified as “white” and people classified as “colored,” was unconstitutional and also overturned Pace v. Alabama (1883). With this matter settled, whites and blacks could now legally wed, in all states. This is very important to civil rights; however, I want to focus on “who’s coming to dinner” in 1901. This dinner event would mark a larger African-American victory for civil rights. 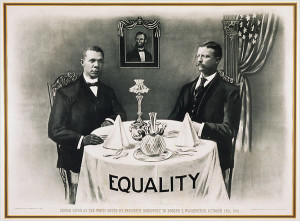 On September 14, 1901, Vice President Theodore Roosevelt was sworn in as President of the United States. (President McKinley had been assassinated.) One of his first actions was requesting the presence of Booker T. Washington so that they could discuss civil rights issues. Booker T. Washington came, on October 17th, and the two worked late into the day. Out of respect and courtesy, President Roosevelt asked Booker T. Washington to stay for dinner. This would be the first time that an African-American had ever been entertained in the White House. African-Americans across the country were thrilled by this. One African-American said that this invitation was the “greatest step for the race in generations.” Another stated that President Roosevelt’s “act in honoring [Washington] was a masterly stroke of statesmanship–worthy of the best minds this county has produced.”

That being said, there were those--especially in the South–that were unhappy with President Roosevelt’s decision to invite Washington for dinner. Senator Benjamin Tillman stated, “Now that Roosevelt has eaten with that nigger Washington, we shall have to kill a thousand niggers to get them back at their places.” Governor Allen Candler stated his opinion, that “No self-respecting man can ally himself with the President, after what has occurred…And no Southerner can respect any white man who would eat with a negro.” Governor Miles McSweeney declared, “No white man who has eaten with a negro can be respected; it is simply a question of whether those who are invited to dine are fit to marry the sisters and daughters of their hosts.”

Everyone had their opinions, but what shocked me the most was some of the material printed in prominently and highly circulated newspapers. Birmingham, Alabama’s The Enterprise wrote, “The Incident of counselling with a negro and dining with his establishes a precedent humiliating to the South.” Richmond, Virginia’s News stated, “At one stroke and by one act he has destroyed regard for him. He has put himself further from us than any man who has ever been in the White House.” Memphis, Tennessee’s The Commercial Appeal, which is still the largest newspaper in the Memphis area (it’s what I read), published, “The example of president or potentate cannot change our views. If some coarse-fibred men cannot understand them it is not the concern of the Southern people.” 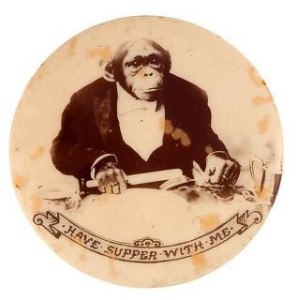 While the above mentioned are all detestable and show the hatred and resentment that the South still had for the North and blacks, the following words from Senator Edward Carmack paralleled with the thoughts of the Memphis News-Scimitar. Senator Carmack believed that Roosevelt’s dining with Washington was “an out-and-out damnable outrage!” Apparently this sentiment rang true with the Memphis News-Scimitar, because they published the following:

“The most damnable outrage which has ever been perpetrated by any citizen of the United States was committed yesterday by the President, when he invited a nigger to dine with him at the White House.”

Really? That is the most damnable outrage which has ever been perpetrated?

While President Roosevelt later admitted that the invitation was a poor political move, he did not regret his decision. President Roosevelt would dine several more times with Booker T. Washington, but never again in the White House. He later wrote the following about the event: “When I asked Booker T. Washington to dinner, I did not devote very much thought to the matter one way or the other. I respect him greatly and believe in the work he has done.” 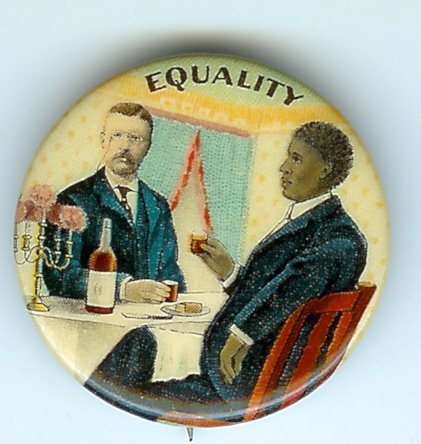 The two books below are sources for all of the quotes: