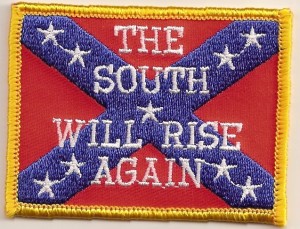 I couldn’t believe it when I saw the following headline on CBS news, After 148 years, Mississippi finally ratifies 13th Amendment, which banned slavery. I mean, it had to be a joke or an error, right? Born and raised in Tennessee, I am familiar with the ways of those in the South that still fly their Confederate flags and deem it necessary to adorn their vehicles with bumper stickers that say “The South Will Rise Again!”

Don’t they understand that the “South” has risen again…?

Do they not know that when this quote was originally established, it was in reference to the fact that the North has laid waste to southern states–socially, economically, and politically. “The South Will Rise Again” was not established as a redneck’s bitter war cry; however, that it what it has become.

While there were many responses given to answer this question on Yahoo Answers, there were two main answers that were repeated: 1) an answer that explained the need for restoring the economic state of the former Confederate States of America; 2) an answer that described it as the rally cry of a sore loser or that its literal translation is  “I’m a stupid, annoying redneck. And I’m proud of that.”

I wouldn’t say that I hear this expression often, but I hear it enough that I can say–with utmost certainty–that 99% of the people who do allow this creed to pass through their lips are not knowledgeable about the phrase’s meaning or the social, economic, or political disparity caused by the American Civil War.  (Knowing these people, I can also attest that the following comment is not only appropriate, but correct for the majority of  those that use this phrase with regularity. Sorry, it is a little more off-color than my normal humor.)

There can be no question that the South has certainly risen again. Memphis, Tennessee, where I live, is the home of a handful of Fortune 500 companies (such as Federal Express, AutoZone, and International Paper). Memphis was also ranked as the world’s second busiest airports by cargo traffic (moving 3,916,937 metric tonnes in 2010). [1] Further south is Atlanta, Georgia, the city that General Sherman burned to the ground, which is headquarters to 10 Fortune 500 companies (Coca Cola, UPS, Home Depot, and Delta Airline…just to name a few). It sounds like the South is doing okay these days… But back to the real story.

If you have forgotten the title of this particular post, it was “The Importance of Historical Curiosity.” The following example shows the importance of historical curiosity. Because of the sleuth work of Ranjan Batra, as well as his intense desire to know more about a scene depicted in the movie “Lincoln,” the state of Mississippi was able to rectify a paperwork error–a bureaucratic bungling of a bill. (The following is an excerpt from the CBS article.)

After watching the film, which depicts the political fight to pass the 13th Amendment, Batra did some research. He learned that the amendment was ratified after three-fourths of the states backed it in December 1865. Four remaining states all eventually ratified the amendment — except for Mississippi. Mississippi voted to ratify the amendment in 1995 but failed to make it official by notifying the U.S. Archivist.

While Mississippi was indeed the last state to ratify the 13th Amendment, they did do it before 2013. It was originally ratified in 1995–I know, it is still an embarrassment–but was incorrectly filed with the U.S. Archivist; therefore, the Federal Register was unaware and did not show Mississippi as having ratified the 13th Amendment.

One of the comments left by a reader was:

“Folks should watch… ‘Mississippi Burning’. Then they will realize this was no ‘oversight’. This was deliberate foot dragging. Mississippi is at the bottom of almost every list of achievements of the 50 states, particularly educational achievements.”

What do you think? Was this intentionally sabotaged so that Mississippi would never ratify the 13th Amendment or was it an honest mistake?

It goes to show you, when people take interest in history, the world changes. 🙂 It’s a good thing that Ranjan Batra had a hankering for histoy!

4 thoughts on “The Importance of Historical Curiosity”