Like many other living things on this planet, humans have powerful instincts for competition, domination and control. Those who posture the most are able to establish themselves as superior and subsequently work to create a distinction between themselves and those who are perceived or shown to be below them. With this kind of blinding power comes a certain amount of influence over others, which has been used to varying degrees by leaders throughout the ages of mankind. The resulting series of class-based hierarchies dates back about as far as recorded history, and the denizens of higher social classes have always felt entitled to the aid of slaves and servants.

Women of prestigious status have long seen it as a necessity to have assistance with things like housecleaning, child rearing, and yard work, despite the fact that women in lower classes have no choice but to balance all of these tasks alone. Being raised by a dedicated staff of servants became a hallmark of refined breeding in high society. Although the details and nuances of relationships between nobility and servants have certainly evolved since then, they can still be observed today.

The term maid has been used to refer to all kinds of female servants since the Middle Ages. It was derived from the commonly used term, maiden, which referred to a young, virginal or unmarried woman. The association between these two terms is related to the fact that most domestic housemaids of that time gave their lives to service and were not allowed to marry.

Maids were historically kept in massive estates as part of a huge staff. They were not always paid for their services, but were treated humanely enough. They were provided with food, clothes and boarding inside the homes where they were employed. They were responsible for all the details of household maintenance so that their Masters could focus on matters more fitting to their social status. The service of multiple maids was widely considered essential to the management of sprawling palaces, castles and estates between the Middle Ages and the 19th century.

In some periods of history, the human obsession with classification by rank was applied even to servants themselves. They were often arranged into their own social hierarchies and assigned to tasks based on how closely they were allowed to work with the masters of the household. These stations were usually set in stone, and there was little opportunity for a maid to move up in the ranks once she was assigned a set of tasks.

In the Victorian Era, the highest ranking servant managed the staff of a large estate and was called the housekeeper. Below her was the Lady’s maid, who interacted mostly with the Lady of the house. Below this classification was an entire set of ranks for housemaids whose responsibilities related to maintaining the condition of various rooms in the house. The head of the housemaids reported to the housekeeper and managed the operations of subordinate housemaids, such as parlor maids, chamber maids and laundry maids. Nannies also reported to the housekeeper and were in charge of all servants responsible for childcare. Below all of these was an entire staff of lower-class servants who were dedicated to the preparation and serving of food, as well as the maintenance of kitchen areas.

This structure for managing large estates also existed in earlier civilizations such as ancient Rome, but all of these roles were filled by persons who were widely referred to as slaves. Similarities to this system can also be seen in the present-day hospitality industry. The upper class has since become much smaller, and those who carry this distinction tend to own multiple homes as opposed to one or two large estates. Many of the huge British country homes which were once managed by maids have now been transformed into hotels or resorts, yet they still require service staff in order to function.

It is now most common to find maids working on a daily basis for a maid service or agency. Only the highest class folk are known for hiring an entire staff of servants. Throughout the classes of upper middle and above, it is not unheard of for a household to have one or two live-in servants. Aside from that, it is pretty rare to find a maid who is completely sustained within the estate of her employer. Usually if she is it has something to do with childcare. 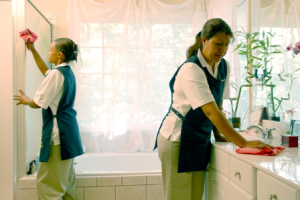 Today, maids sometimes have entire families of their own to support. However, they are not always paid a full living wage. Despite the variety of costs and charges associated even with higher-end agency cleaning services, the maids they employ are not generally paid more than minimum wage. Some work as maids to supplement other forms of income. However, it is very difficult to live above the poverty line on a maid’s wages alone.

With the rise of two income households and single parents, the demand for household cleaning services is rising. The price of these services does not seem to be rising to meet the demand. Instead, rival agencies are offering their services for rock bottom prices just to compete. According to the numbers from 2009, about half of all domestic servants in the US are either first or second generation immigrants of varying legal status. These cases are widely associated with awful treatment and underpayment.

When observing the history of maids throughout all the times and cultures they have inhabited, it is hard to deny that one thing has remained consistent. Maids have rarely – if ever – been paid wages that were equivalent to the value of what they do. The dynamic between Master and servant has evolved in small ways, but not nearly as much as one would expect. Until a form of power is found which does not corrupt, the so called Noble are doomed to keep repeating the same crimes against those they perceive to be inferior.

Author Byline: Karla Jennings is the writer and owner of The Home & Moms, a DIY decorating and home improvement blog. She is also a writer for Maid Brigade cleaning services.

3 thoughts on “The History of Maids”