When one thinks of the obstacles that blacks had to overcome in America, there are a few obvious obstructions: the Ku Klux Klan, poll taxes, and Jim Crow laws. One not so obvious, however, was the Communist Party. The Communist Party and the Civil Rights Movement promised to be a mutually beneficial relationship; however, it turned sour, very quickly. As a nation, the American people detest communism. Unfortunately, this hate became a large hindrance to the Civil Rights Movement.

Starting in the 1920s, Communist Party members started to focus on the needs of the unemployed, in the poorest parts of the nation. As it turned out, the poorest of the poor were African American communities in the “black belt.” As the New Deal era brought about unions, the Communist Party became involved. They saw it as an opportunity to fight against social and economic issues regarding the class system. Union participation saw a five-fold growth in just one decade. The communists were against racism, however, their main attraction to blacks was gathering their involvement with the labor movement—and unions promised to be a metaphorical goldmine.

One of the main events that solidified the Communist Party and the Civil Rights Movement relationship was the Scottsboro case. In 1931, nine, black teenage boys were arrested for rape. While this case stands as a pillar of injustice, caused by denying an impartial jury, fair sentencing, and effective counsel, it represented the lengths that the Communist Party was willing to go to support civil rights and civil liberties. Not only did the Communist Party see to it that the case was appealed, but their efforts virtually ended all-white juries. Other than the NAACP, the Community Party was the only organization that came to the aid of those wrongfully accused.

In 1940, Congress passed the Alien Registration Act of 1940, also known as the Smith Act; it set criminal penalties for advocating the overthrow of the U.S. government. As the Communist Party attempted to recruit blacks, the majority of Americans saw it as the communists’ attempt to infiltrate the African American communities. Blacks quickly saw that the United States was turning against the Communist Party, and the Civil Rights Movement severed all ties with communist-operated organizations and unions. Unfortunately, it was too late. Americans and government officials (such as FBI Director J. Edgar Hoover) would continue to link communism to the Civil Rights Movement—this created quite a headache for later leaders, such as Dr. Martin Luther King, Jr. 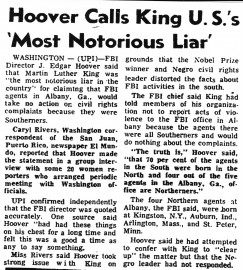 One of the sharpest thorns that the Communist Party had inadvertently plunged into the side of the Civil Rights Movement occurred during the 1946 election. The liberals of the United States had turned on each other—in a battle over communism. Patricia Sullivan, author of Days of Hope: Race and Democracy in the New Deal Era,

referred to the party’s behavior as “a form of self-destruction.” There were those that believed that the communists movement had immobilized the left, the Democrat’s support for the country was the lowest since 1928, and the Republicans were using the Communist Party to “hopelessly divide and then destroy the liberal movement.” This “self-destructive” behavior led to a Republican sweep in both houses of Congress; a sweep that would allow the House Un-American Activities Committee to “purge Communists and their allies from major institutions in American life.”

It is true that the Communist Party was an early friend to blacks; however, I believe that in the long run, they set back the Civil Rights Movement by decades.

3 thoughts on “The Communist Party and the Civil Rights Movement”