In reading Anne Bradstreet’s “The Prologue,” I sense what might be America’s first feminist publication. This poem, printed in 1650, contains overtones of anti-Puritan views; specifically, in regard as to how New England Puritans viewed women in their society. The following is my analysis of “The Prologue.”

To sing of Wars, of Captains, and of Kings,
Of Cities founded, Common-wealths begun,
For my mean Pen are too superior things;
Or how they all, or each their dates have run,
Let Poets and Historians set these forth.
My obscure lines shall not so dim their worth.

Anne Bradstreet starts the poem by describing several notable events and people that her “mean Pen” (mean in this instance meaning humble) are unworthy of her writing. She further states that she would not do such historic events justice with her writing, that event worth recording should be so by a poet or historian.

But when my wond’ring eyes and envious heart
Great Bartas’ sugar’d lines do but read o’er,
Fool, I do grudge the Muses did not part
‘Twixt him and me that over-fluent store.
A Bartas can do what a Bartas will
But simple I according to my skill.

Furthermore, she is upset that the Greek goddesses of the arts, the Muses, did not give her such talent as that of Guillaume du Bartas. She believes—unlike Bartas—that her capabilities are limited.

From School-boy’s tongue no Rhet’ric we expect,
Nor yet a sweet Consort from broken strings,
Nor perfect beauty where’s a main defect.
My foolish, broken, blemished Muse so sings,
And this to mend, alas, no Art is able,
‘Cause Nature made it so irreparable.

School boys, mere children, are not expected to write noteworthy speeches; nor does one expect a broken instrument to play music worthy or recognition. Bradstreet believes that her “Muse”—her writing inspiration is broken, irreparable.

Nor can I, like that fluent sweet-tongued Greek
Who lisp’d at first, in future times speak plain.
By Art he gladly found what he did seek,
A full requital of his striving pain.
Art can do much, but this maxim’s most sure:
A weak or wounded brain admits no cure.

In this stanza, Bradstreet makes reference to Demosthenes, the famous Greek orator who conquered a speech defect by filling his mouth with pebbles. She brings attention to him to say that one can practice and train; however, a weak brain cannot be fixed. Anne Bradstreet’s poem, to this point, almost crosses into a depressing poem—one of self-deprecation.

I am obnoxious to each carping tongue
Who says my hand a needle better fits.
A Poet’s Pen all scorn I should thus wrong,
For such despite they cast on female wits.
If what I do prove well, it won’t advance,
They’ll say it’s stol’n, or else it was by chance.

Here is where the poem begins to get very interesting. If you didn’t notice it in third line, of the first stanza, she has a sarcastic tone that she uses as she refers to the lower status of herself, as a woman—“For my mean Pen are too superior things.” It appears again here when she speaks of how the Puritan men talk to her. Bradstreet claims that men find her obnoxious; they tell her that “[her] hand a needle better fits.” In fact, by some happenstance that Anne Bradstreet, a mere woman, could produce a work of art worthy of praise, it is sure to be “stol’n” or just dumb luck.

But sure the antique Greeks were far more mild,
Else of our Sex, why feigned they those nine
And poesy made Calliope’s own child?
So ‘mongst the rest they placed the Arts divine,
But this weak knot they will full soon untie.
The Greeks did nought but play the fools and lie.

Unlike the New England Puritans, the Greeks were more open to the fairer sex. Surely, this had to be the case as all nine of the Muses of arts were women.

Let Greeks be Greeks, and Women what they are.
Men have precedency and still excel;
It is but vain unjustly to wage war.
Men can do best, and Women know it well.
Preeminence in all and each is yours;
Yet grant some small acknowledgement of ours.

In an almost obsequious manner, Bradstreet admits defeat—that men will always excel over women. “Men can do best, and Women know it well.” HOWEVER…she does believe that men should acknowledge women when they do something well.

And oh ye high flown quills that soar the skies,
And ever with your prey still catch your praise,
If e’er you deign these lowly lines your eyes,
Give thyme or Parsley wreath, I ask no Bays.
This mean and unrefined ore of mine
Will make your glist’ring gold but more to shine.

Bradstreet ends the poem asking that if any great writers read her “lowly lines” that they pass on recognition. She doesn’t want the usual laurels used to crown poets, just some acknowledgement. Then she ends it on a rather awkward note, insisting that it will make their works of art shine in comparison.

As mentioned previously, when Bradstreet mentions how Puritan men view women, she writes with sarcasm—it drips off the page. The instance where Anne Bradstreet mostly boldly exclaims her distaste for the Puritan’s philosophy on women is when she wrote “For such despite they cast on female wits.” 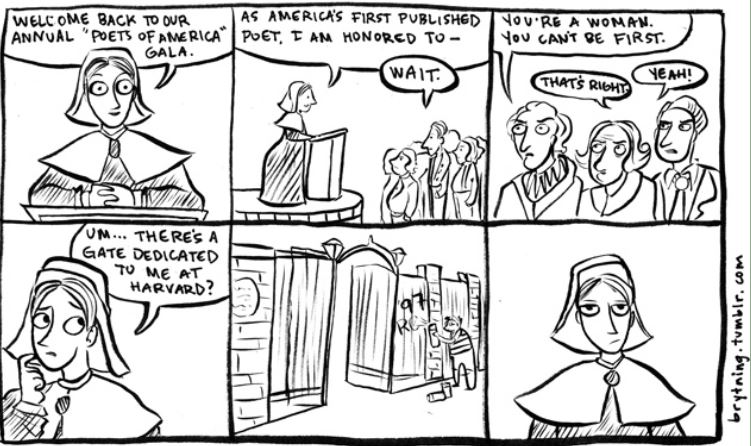