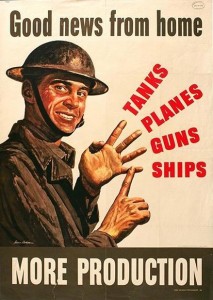 The attack on Pearl Harbor, on December 7, 1941, was the event that set into action the United States’ full involvement into World War II. In the following month, President Franklin Roosevelt would pass numerous Executive Orders. One of these, Executive Order 9017, reestablished the National War Labor Board. This committee was originally created in 1918, by Woodrow Wilson, but was disbanded in 1919. It was created to settle disputes between workers and employers during World War I; its main purpose was to insure labor reliability and productivity during the war. Now that America was fully engaged in the war, it was important that our factories produce all the materials required to win.

The National War Labor Board, in combination with other legislation and federal agencies, had a large impact on labor organizing in Memphis. With the goal of preventing strikes and work stoppages, the federal government’s decisions tended to be in favor of labor—allowing unions to gain strength. In reviewing the effect that World War II had on unionization, labor organization, and its success in prevent work stoppages, a study of Memphis serves as a fitting example. In looking at the direct impact on Memphis, Tennessee, World War II gave Memphis three main improvements: curtailing the corruption of E.H. “Boss” Crump’s political machine, the addition of thousands of jobs, and a fighting chance to bring equal rights in the work place.

Due to the war, Memphis factories flourished. It pumped tens of millions of dollars into the Memphis economy. Not only did the required output of factories increase, but the work for those in the construction business grew, too. With the war came the need for military facilities, such as the construction of the Millington naval aviation base.  The growth in both factory and construction work changed Memphis from a labor market based on cotton and lumber to a city of industry. With the growth of the industrious side of Memphis, thousands of workers flooded Memphis—bringing with them their union experiences and expectations.

Federal authorities also played a large role in combating the physical anti-union force presence in Memphis; they were well aware of Crump’s political machine and its effect on Memphis’ labor conditions. These federal authorities made it clear to city officials in Memphis that continued anti-unionism would mean the loss of federal contracts. Now that the government had taken the wind out of the sails of political boss Crump, Memphis’ unions had a chance to grow unhampered. 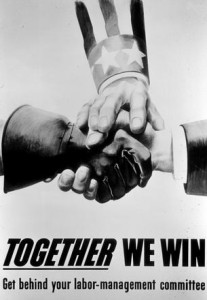 By the time the war ended in 1945, Memphis unions had secured their future. With firm footing, due to the federal agencies such as the National War Labor Board, the unions would continue to grow and secure the rights of everyone: white men, black men, white women, and black women. World War II did more than defeat the Axis and create the United Nations (UN)—it defeated unbearable work conditions and created a strengthened core in America’s unions.