It often fascinates me how one man, unknowingly, can influence another person or provide the inspiration for an invention. A prime example of this is braille. If you are unfamiliar with braille, it is a written system that allows the blind to read and write. Technological advances, over the last several decades, have made braille less useful; however, in a time without computer, braille proved priceless. During the 1950s, it was estimated that 50% of American, legally blind, school-aged children could read braille. Possibly the most fascinating aspect of braille, however, is how it came to be. 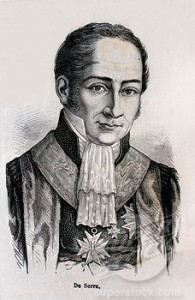 In the early 1800s, Napoleon Bonaparte commanded that Captain Charles Barbier devise a way for his soldiers to communicate both silently and in the dark. (As a soldier on the front lines the last thing you would want to do is turn on a light, thus giving away your location.) With these specifications in mind, Barbier created sonography, more commonly known as night writing. Barbier’s night writing was deemed too difficult to use and was not further developed for use in warfare. Years later, however, in 1821, the French Academy of Sciences recommended that Barbier use his concept to help teach the blind to read. Upon his arrival to the Royal Institution for Blind Youth, in Paris, Barbier showed the students the night writing and Barbier was introduced to Louis Braille.

Louis Braille, a boy currently at the age of twelve, was blinded at the age of five. As a curious child, Louis had managed to get into his father’s tools and accidentally plunged an awl into one of his eyes. (Ouch!) His injured eye was unusable and infection quickly damaged his other eye. If you appreciate irony, you might find it interesting that an awl, like the one his father used and caused Braille’s blindness, would be the same tool that Braille used to create a useful form of communication, which would allow the blind to read and write.

Fast-forwarding back to 1821, Braille worked diligently with Barbier to improve on his night writing; however, Barbier, a prideful man, was unwilling to take criticism from a mere boy. Louis Braille told Barbier that the major defects of his night writing were: 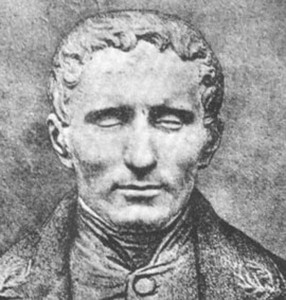 Over the next three years Braille, without the help of Barbier, worked–awl in hand–to create his first version of braille.

I am not saying that Napoleon directly created braille, but who knows how long it would have been before the inspiration to create an efficient written language for the blind was created?

As I mentioned earlier, there is not much use for braille these days. The American Printing House for the Blind reported in their 2012 Annual Report that of students under the age of 21, only 8.8% use braille as their primary reading medium. [1] However, it goes without saying that most technology is based on a forerunner and braille is clearly the forerunner for all blind-based reading mediums. Furthermore, Captain Charles Barbier’s response to Napoleon’s demands, the invention of night writing, served as the forerunner for braille.

[1] Statistical Facts about Blindness in the United States

1 thought on “Napoleon’s Influence on Braille”