As I talk to people about my aspirations, this website, or history in general, I tend to get the following response, “History? Yuck! I hated history when I was in school–dates, names, places…” They continue to grumble about their distaste of all things history. It is as if society sees historians as a bunch of drab, over-educated, Civil War reenactors.

I was watching a show the other day, Desperate Housewives (a television dramedy-mystery series), and there was a scene in this particular episode where a husband and a wife were on a picnic celebrating their anniversary, only, in the middle of it, several American Civil War reenactors disturbed them. (I’ve placed the clip below–it’s pretty funny.)

I feel as if this isn’t an exaggeration. I feel as if there is (dare I say it) aggression against–if not hatred of–those that classify themselves as historians. I don’t think it is too far-fetched to say that society sees historians as a nuisance. This is not to say that everyone should love history; trust me, I hate math. However, I can (and do) appreciate math.

There was a popular internet meme circulating last year, “What my friends think I do.” This meme is generally a black background, with six picture boxes. Each box is filled with a picture and underneath the picture is a caption. Each caption reads, “What ____ think(s) I do.” (Below is an example of one for those claiming to be historians.) It is supposed to be a humorous way to show how your friends, family, and society’s views your profession. 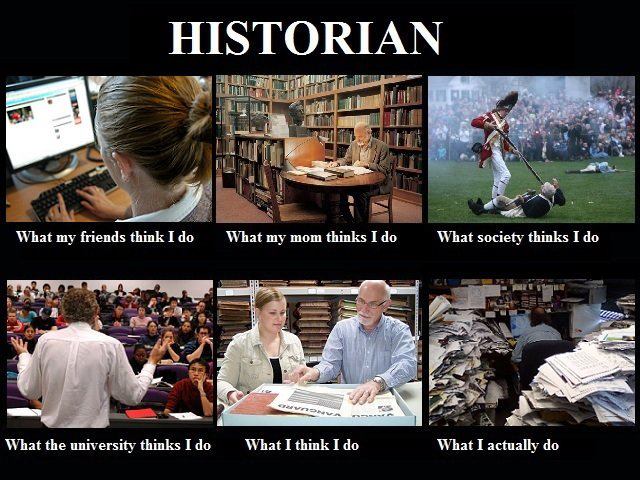 Is that how society sees historians? They think we’re all a bunch of enthusiasts–reenactors? 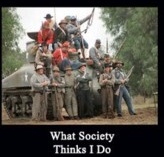 Each meme I found has six different pictures; however, all of the pictures under the category of “society” are almost identical.

I am not going to continue ranting about the under-appreciation of those that have made a career out of history, but I did think it was interesting.