Growing up, I often saw ads for CD subscriptions. I never signed up for those, I never saw the point. Subscriptions in general seem weird to me. There has never been a magazine that I have wanted badly enough that I want every single issue to arrive at my home. Earlier this year, I signed up for our local newspaper subscription. It was annoying. I received it, and never read any of them. It turned out that the newspapers came in handy when I started a painting project; however, I never actually read any of them. 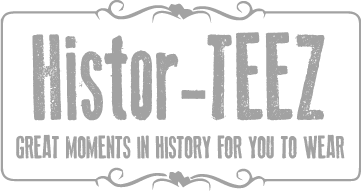 I think that I did find a subscription worth signing up for, and the best news is that they have one-month, three-month, six-month, etc. subscriptions. How would you like it if every month you had a unique, historical t-shirt sent to your house? Well that is what the guys at Histor-TEEZ are up to!

So how does it work?

Become a member, and every month you will receive a one of a kind designed T-Shirt depicting a Historical Moment! A new historical moment is featured every month and once that month is up, that shirt is retired forever.

Seems pretty cool, right? I have just given you the last-minute gift idea that you needed for your history loving companion. Happy Holidays! Who wouldn’t be stoked to get this shirt, and then know that they are going to get more throughout the year?

I know what I will be asking for, for my last stocking stuffer…

Once I get one, I will let you guys know what I think about the shirts.

If you have Twitter, you probably already heard about this next part. I received an email yesterday from Twitter with a subject line which said, “See the most popular Tweet of 2012.”

If you think about it, in today’s technological world, social networking sites–such as Twitter and Facebook–record the present. Twitter may very well be the next tool used to catalog information for the history books. Either way, Twitter has a page with the two top re-tweeted tweets of 2012. The 2012 Year on Twitter page talks about the most popular re-tweets, topics trending on Twitter, and much more. If you scroll to the bottom, there are links for 2011 and 2010 as well. So in a way, there it is. It is Twitter’s History of the World, Abridged Version.