Last time I covered the events leading up to the Tulsa Race Riot; make sure you check it out before going any further. The Tulsa Race Riot got ugly, fast. Like many conflicts, a misunderstood action set ablaze fear, which started a panic. Once the two-thousand white arrived back at the courthouse–armed to the teeth–the black responded in kind. 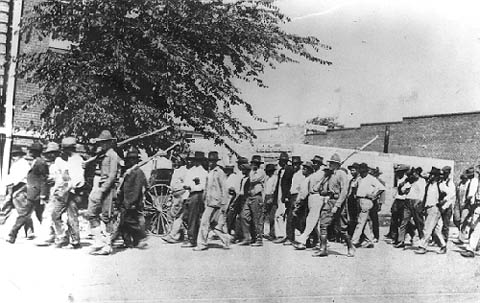 Approximately seventy-five black men armed themselves and went back to the courthouse, for fear of Rowland’s life. Upon their arrival, they were met with many unfriendly, white faces.The armed black men were once again turned away by Sheriff McCullough. Before the men could leave, however, witnesses report that white men approached one of the armed black men and demanded that he forfeit his weapon. He refused to disarm and (accidentally or as a warning, no one is certain) fired his pistol.

In the confusion–and no doubt, in fear for their life’s–the white men opened fire on the seventy-five, armed, black men. This event would ignite the fire which would be later named the Tulsa Race Riot. The remaining blacks retreated back to Greenwood, with the whites close on their heels.

Within an hour, the local chapter of the American Legion and the Oklahoma National Guard were prepared and had plans in motion to offer protection; however, not for blacks, but whites. That’s right, the American Legion patrolled the streets of white neighborhoods near the established black community of Greenwood. Once the Oklahoma National Guard arrived, they began rounding up all of the blacks outside the community walls and detained them.

Scattered throughout the town of Tulsa, many skirmishes occurred. This, unfortunately, would not cause the majority of the damage. The destruction of the Greenwood community was a result of white mobs setting fire to buildings. As the mob pushed their way through the commercial parts of Greenwood, the residential areas heard and saw the destruction. Some went to defend their city, but most of the residents fled. As the blacks retreated from their homes, white immediately looted them. If running from white mobs wasn’t enough, the blacks were receiving heavy gunfire from above. Biplanes, left over from World War I, were used to shoot the blacks and drop incendiary bombs on them.

The part of this tragedy that I find most interesting is how it ended. At 9:15 a.m., almost eleven hours after the first shot was fired, the Oklahoma National Guard’s reinforcements arrived. General Charles Barrett and one-hundred and nine troops arrived by train. Legally unable to act until he had made contact with all the local authorities (mayor, sheriff, and police chief), General Barrett and his men stopped to have breakfast. By the time action was taken, at 11:49 a.m., the blacks had all fled the city or were in detention centers. At 11:49 a.m., General Barrett declared martial law on the city of Tulsa. Peace was confirmed by noon.

When it was all said and done, no one was held responsible. Police Chief John Gustafson was fired, but never was charged with any crimes. The blame rest with him  because he “neglected his duty.” No charges were filed against any white city officials, nor were any filed against any of the white rioters. Even after the smoke had settled, the white business men of Tulsa attempted to zone Greenwood as a commercial-only area, preventing blacks from being close to the whites.

As for Dick Rowland, he was never harmed and released with all charges dropped. He left Tulsa immediately, and he never returned.