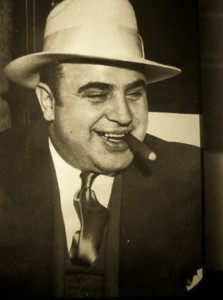 Long before “The Godfather” or “Scarface” hit the big screen, organized crime had left a permanent mark on America’s landscape. It was a perfect storm of conditions that resulted in Chicago’s Al Capone rising to the top of the city’s mafia organization and becoming one of the most famous gangsters in history. By the time he was sent to California’s Alcatraz Prison in 1931, Capone had built an empire off of his criminal dealings, creating a personal fortune of more than $100 million while having the local government in his pocket. Unfortunately, Capone’s path to fame and fortune also resulted in countless murders.

Capone’s rise to the head of the Chicago mafia was much different than the traditional story. While many mafia members originated as poor immigrants trying to make a better life for themselves—albeit through illegal means—Capone was born into a professional family with a stable financial situation. His father was an Italian immigrant who carried to America an education and a profession as a barber. Although they lived in poverty in Brooklyn tenements, they were far better off than many other immigrant families when Al Capone was born in 1899.

Despite this promising start, several factors are believed to have contributed to Al Capone’s inclination toward the gangster life.

Heading Down the Wrong Path

Historians believe that Al Capone’s young experiences pushed him toward a life of crime. He grew up in an ethnically mixed part of Brooklyn and was exposed to some tough elements on the streets. His education at a Catholic school brought similar experiences: he experienced violence and was eventually expelled for hitting a teacher.

Shortly after being kicked out of school, Capone met Johnny Torrio, a gangster who ran a racketeering business, while maintaining a front that kept the authorities off his trail. This helped Capone understand how to hide illegal gangster practices behind a seemingly respectable business.

Torrio left for Chicago in 1909, but 10 years later he brought Capone to the Windy City to help with the business. Capone remained loyal to him as Torrio was elevated to the head of the Chicago mafia. In 1925, Torrio retired and handed over his position to Capone. Just like that, Capone became one of the most powerful figures in the mafia.

Under Capone, the Chicago mob enjoyed almost no interference from local police in its massive bootlegging operation, which thrived during Prohibition. Local politicians aligned themselves with Capone—in part because Capone’s thugs helped influence some of the most corrupt elections in U.S. history—and Capone’s legend grew as he gained media attention and thrived in the spotlight. 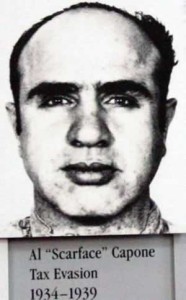 One of the most significant events of Capone’s reign came in 1929. Looking to strike back at the increasingly confrontational North Side Irish gang, which was run by Bugs Moran, Capone’s gang was allegedly involved in a mass killing known as the St. Valentine’s Day Massacre. This incident was an ambush of North Side gangsters by Capone’s group, and it resulted in the deaths of five North Side gang members and two affliates. The incident drew huge media attention and stirred up outrage in Chicago. No one was ever charged in the killings, and—while evidence is limited—many believe Capone was involved in ordering the killings. At any rate, it hurt Capone’s reputation in Chicago.

In 1931, Capone was finally arrested, charged and ultimately convicted of tax evasion, whereupon he was sent to prison in Atlanta; in 1934, he was moved to the infamous Alcatraz Federal Penitentiary in California. He was released on parole in 1939, but his interest and power in organized crime had faded and his mental and physical health deteriorated. In fact, a psychiatrist in 1946 evaluated Capone and determined that he had the mental faculties of a 12-year-old. He died of a heart attack following a stroke less than a year later, in 1947.

Today, Capone’s influence can be seen throughout Chicago. You can still visit the Lexington Hotel, which was one of the most famous Chicago hotels of the time and was so frequently visited by Capone that it became known as “Capone’s Castle.” The Cicero neighborhood where Capone’s rise to power began is still a vibrant and historic community in inner city Chicago. And you can follow the path of the old Route 66 south from Chicago, a highway project Capone rushed because the fast road made for easier bootlegging between St. Louis and the Windy City. So while Capone may be dead, his imprint on Chicago will continue for generations.