On September 15, 1935, Hitler convened the Reichstag, in Nuremberg, to pass three laws. The first of these laws was the Reichsflaggengesetz (The Empire Flag Act). It was with this legislation that the Nazi Party flag, bearing the all-familiar swastika, would replace Germany’s current national flag. If you are unfamiliar with ancient history or religious history, you may not know that the swastika was around long before the Nazi Party.

That’s right, Adolf Hitler did not create the swastika! 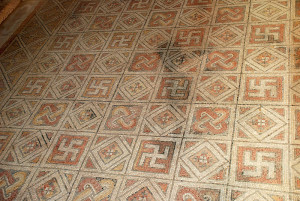 Variations of the swastika have shown up in archaeological sites, on numerous items, dating back thousands of years. The history of the swastika is one that dates back as far as 10,000 B.C. The swastika can be found in artwork, sculptures, and writings found in Africa, Asia, Europe, and the Americas. I could write thousands of words on the swastika and its long history; however, I am going to spare you.

The word swastika comes from the Sanskrit svastika which translates as “to be good.” Before the Nazi Party got ahold of it, the swastika was symbolic for life, strength, and good fortune. In Jainism, the four arms represent the cycles of life, the four destinies: heavenly beings, human beings, animal beings, and hellish beings. For Hinduism, the four arms represent the purusharthas: dharma, artha, kama, and moksha. Below is a slideshow that shows some of the examples of the swastika in jewelry, landmarks, and everyday items such as currency; they are historic examples of swastikas throughout the world–and throughout time for that matter.

So after thousands of years of good fortune and life, how did this symbol become one of discrimination, persecution, and eventually genocide? 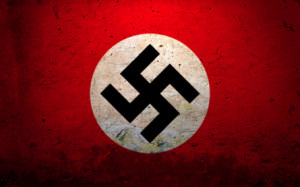 On August 7, 1920, the Nazi Party confirmed their new flag–a red flag with a white circle, with a black swastika inside of it. In Hitler’s Mein Kampf, he stated that the Nazi Party needed a new flag–one that flew as “a symbol of our own struggle.” This flag would later become the flag of the nation and proudly be on display until the collapse of the Nazi Party, in 1945. At this point Germany replaced the Nazi flag with a new–less feared and despised–flag

In parts of the world, specifically in regions with high concentrations of Buddhist or Hindus, the swastika is prominently displayed as a religious symbol. However, in other parts of the world, it is forbidden to be on display. In Germany, Hungary, Lithuania, and Poland it is against the law to fly a Nazi swastika flag or publicly display Nazi symbols. Even on the other side of the world, in Brazil, it is against the law to manufacture, distribute, or broadcast the swastika with the intent to propagate Nazism.

Why have we allowed a small time period of history, a twenty-five year span, to unravel a symbol that, for thousands of years, represented life, strength, and good fortune?

That brings me to a bit of news, which is occurring today–probably as I write this. Today, a day which a pro-swastika group has declared, World Swastika Rehabilitation Day is being recognized with a giant swastika banner that will be flown over numerous major cities. This group hopes to bring awareness to what the swastika originally stood for. The president of the ProSwastika Alliance stated:

“We want to fully rehabilitate this symbol that’s so dear to billions of people. It’s been used for thousands of years as a symbol of well-being and good luck, so when Westerners interpret it as meaning something ugly just because the Nazis used it, our society denies millions of people the right to live their religion freely.”

As part of their goal, they have given the swastika a face-lift. The symbol that they will be flying is one of a swastika interlocked with a Star of David.

It is nice to see a group that is unwilling to let a horrendous act of one nation redefine and rewrite the history of the swastika. 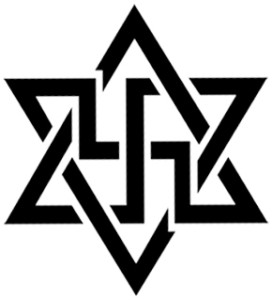 2 thoughts on “Adolf Hitler and the History of the Swastika”