Both the Union and Confederate armies used hot air balloons for spying during the Civil War. Their use marked the first time any aeronautical device was used for war purposes in the United States. Balloons had been used previously for civilian purposes but it wasn’t until Thaddeus Lowe met with Abraham Lincoln in June 1861 that they were considered for use in war.

Lowe, a professional aeronaut, demonstrated before the President his ideas for balloon reconnaissance and his plans for sending telegrams to commanders on the ground. With the President watching, Lowe boarded the Enterprise, which was tethered to the ground, and floated to a height of 500 feet. Impressed with the display, Lincoln established the Balloon Corps later that summer. He granted Lowe permission to requisition the manpower and materials necessary to get the Balloon Corps off the ground.

The first balloon for military use lifted off with Lowe n the basket above Arlington, Virginia, just outside of Washington, DC. It rose to a height of 1000 feet and telegraphed the movements of Confederate forces more than three miles away. Unable to see the enemy, Lowe accurately directed Union artillery at the Confederate troops.  As a result, the Union’s Secretary of War requisitioned four additional balloons.

Overall, the presence of balloons caused the Confederate forces to conceal their whereabouts. When Union balloons were present, they blackened their camps at night and set up dummy encampments and gun batteries. These efforts to foil the Union spy efforts took up valuable man power and time. 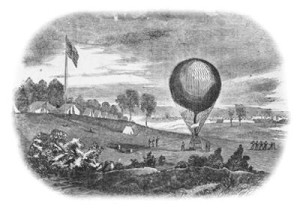 The Balloon Corps didn’t last until the end of the war. General George McClellan, who took advantage of the information balloons offered, was relieved of duty in 1863. After that, funding for the Balloon Corps was cut and Lowe was later accused of misusing funds. Lowe subsequently resigned and the entire Balloon Corps was disbanded in 1863 by General Ulysses S. Grant.

Although the use of balloons certainly contributed to Union victory, they were not used effectively by the commanding generals. In fact, unclear reports from an observation balloon during the 1862 Peninsula Campaign on Confederate troop movements apparently caused General McClellan to withdraw his far superior forces and move them away from Richmond, VA, rather than attack the vulnerable Confederate capital. In retrospect, had he attacked he likely would have overrun the Confederate forces and ended the war several years earlier.

Below are some interesting facts about the use of balloons during the Civil War.

Alan Carr is an avid aviation aficionado and history buff that enjoys writing on what he finds. He currently works with globalair.com to provide resources on aircraft related information.