Today, we talk of “civilization” when referring to almost any widely-settled, urban area. More specifically, we tend to talk of “civilization” as places where we know we can find progress and movement – again, usually the big cities. We use “civilized” as another word for courteous. However, the first civilizations were made of very specific elements.

What Makes A Civilization?

To answer the question, “What Was The First Civilization?” we need to know what elements are present when a civilization has already been formed. There are 9 main elements of a civilization, which distinguish it from simply being a group of cities or a large country.

What Was the First Civilization and Where Did it Begin?

The first known civilization began in what is called the Fertile Crescent. In the modern day, the Fertile Crescent arcs (from right to left) from the Persian Gulf, over part of Iraq, part of Syria,  through Israel, Lebanon, and Jordan. That piece of land edges the Mediterranean Sea, and stops at the Red Sea in Northern Egypt.

Mesopotamia literally means, “between two rivers.” It  became the birthplace of the oldest identified civilization. Because the land was perfect for a large agricultural settlement, it was in Mesopotamia where groups of people became settled enough to begin a civilization.

What Was the First Civilization in Mesopotamia?

The first civilization in Mesopotamia began during the Copper Age, from 5,900 to 3,200 BC. Copper, which was just beginning to replace stone as a less-breakable, easy-to-hammer source of tools, was discovered in large deposits in Mesopotamia.

Because of this, the Copper Age saw the rise of multiple cities in Mesopotamia in the Sumer region. This satisfies 1 out of the 9 elements of civilization: a cluster of cities in one region. The first cities are generally agreed to be Eridu, Ur, and Uruk. At least 6 other cities rose in that same region. Around 3000 BC, the first ruler of Sumer arose, and the first civilization truly began.

What Was the First Civilization? A Land of Organized Government

The first element of a civilization we named was organized or central governments. Prior to the rise of the first king, the cities in the Sumer region only had priest-rulers. They spoke for the gods, and guided the people’s actions through omens and predictions. Fortunes rose and fell, according to these rulers, by the favor and disfavor of the gods.

While the king was still considered a mediator for gods and men (the “divine right” source of authority), he had his own authority. He was no longer an interpreter for the gods, but their voice. From the Shepherd King until the rise of the Akkadian Empire (2350 BC), there was prosperity and peace enough for the rise of city-states under the Sumerian monarchs.

What Was the First Civilization? A Land of Organized Religion

The Sumerian civilization was polytheistic, meaning they had many gods. They had the basic gods, of course. There was the leading god (like Zeus), Anu. There were the gods (more like elements) of creation, Apsu the father, and Tiamut (chaos) the mother. There were the creators of men: Enki son of Anu, and his half-sister Ninki. 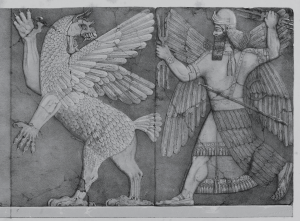 The pantheon, thousands and thousands of gods, was called the Annunaki. Anu was the god of the sun (meaning heaven), Enki of water, and his brother Enlil of sky. They were the higher gods, who listened to petitions. Those who transmitted the petitions from the priests were lesser gods. Each man (or head of household) had a personal god, and each city a patron.

Since the kings of Sumer reigned by divine right, this organized religion was very important to the stability of this first civilization.

What Was the First Civilization? A Land With Social Classes

The moment a ruler and organized government is established, a social hierarchy ranges around it. Sub-classes form automatically and inevitably around the ruling class. They need a means of enforcing laws and defense (the warrior class), a means of keeping records (the scholar class), and so forth. In an agricultural society, lands also become a divider.

The next in line were the commoners, because they were mostly farmers and others who had independent sources of income. Craftsmen (blacksmiths, weavers, woodworkers), fishermen, and merchants were also commoners. The members of this social class could make their livings independently of the noble class.

The third social class was called the client class. Members of these classes were dependent on their skills and the noble classes for their income. They could be stewards of estates, or personal scribes; staff in the temples; and other dependents of noble houses, such as household servants or foremen. They could be small landowners as well.

The last social class was the slave class. The Sumerian society was slave-owning, and the slaves were either taken in battle, or they sold themselves to pay off debts. Slaves could buy their own freedom or become freed. Therefore, they were treated as lower-class members of society but not always as possessions.

What Was the First Civilization? A Land of Specialized Labor

Specialized labor and social classes tend to develop at the same time. When a group of people become large and prosperous enough, some would specialize in metalwork, some in weaving, some in woodwork, others in farming, and so forth. Specialized labor meant that there was demand enough for a household to support themselves on one occupation alone.

The social hierarchy made it easier for specialized labor to be sustainable. Just as in feudal Europe, it was the noble class who created enough demand for a family to do nothing but smithwork or woodwork, and still make a living.

What Was the First Civilization? A Land With A Writing System

For a civilization to exist and endure as such, it needs to have developed its own writing or record-keeping system. In Sumerian civilization, writing began as individual symbols or insignias, and other common symbols that indicated commodities, goods, food, and so forth. As the cities grew, other symbols were developed and added to form more complicated ideas.

The Sumerians used cuneiform, which was a form of writing on clay tablets with edged tools. They progressed from the sharing of common information, to bureaucratic record-keeping, to cultural pieces such as literature. This ensured longer continuation of the civilization, because exact knowledge could be passed down.

What Was the First Civilization? A Land with Monumental Infrastructure

Because dirt roads were easily churned up and destroyed, the early great civilizations paved their roads. In the Sumer region, the roads were paved with limestone. When it rained, the wagon-wheels cut parallel grooves into the roads. The un-repaired grooves became the regular tracks for the wagons to follow. They also built bridges for better transportation.

What Was the First Civilization? A Land with Art and Architecture

Despite developing in the Copper Age, most of the known early Sumerian art was molded as bas-relief in clay. It was usually a depiction of a historical scene or character, or one of their many many gods. Since the central building of each city was the temple, most art pieces were of the pantheon. Like Egyptian paintings, they were usually of profiles. 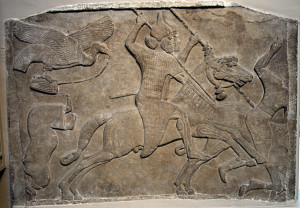 The architecture of Sumer was very dependent on their most common building material, sun-dried mud bricks. The bricks were cleverly fitted together to form walls, pillars, and practically every structure in their civilization. Most unique to Sumer are the first ziggurats, temples which looked like gigantic 4-sided staircases.

What Was the First Civilization? A Land Open to Trade

The Fertile Crescent was noticeably not lacking in very many natural resources. They did not need to trade for food. However, Sumer did trade for raw materials such as hardwood, lacking in the plains. They also traded for luxury materials like precious stones, other metals harder to procure in Mesopotamia, and animals.

The Sumerian People: The First Civilization

“Civilization” is a term meant only for a certain number of people, grouped in multiple cities, who have reached such a level of development that they have a record-keeping and writing system. That is the most basic definition. Scholars discovered later that there were a number of elements commonly associated with this level of development.

The Sumerian civilization is the oldest known civilization because it is the oldest group of people, that we know of, who formulated a writing system. Along with this, they satisfied all other elements: an organized government and religion, social classes and specialized labor, art and architecture and infrastructure, multiple cities and external trade.

1 thought on “What Was The First Civilization?”