There are certainly several weird weapons of WW II, but I think the following video shows some of my favorites. I ran across a video the other day entitled ‘British Secret Wartime Follies.’ The caption underneath the video described the video as: “British science made some dreadful bloopers when they were give free reign to design during WWII.”

There were definitely some interesting inventions…

I have to say, the invention at 2:37, the Hajile (which used retro rockets to land supplies), looks like a primitive version of the process used with the most recent Mars landing. So maybe it wasn’t as crazy as everyone thought.

This led me to searching for other poorly designed, experimental weapons, and I ran across several weapons involving animals. Personally, I thought it was odd that the fate of the world, and the defeat of Axis, relied on animals…but what do I know?

The first one I ran across was when America wanted to attached bombs to bats and let them loose in Japan. The plan was to have the bats hide in crevices of building during the day, normal bat behavior, then BOOM! This apparently was very successful in the testing stages, but was quickly made obsolete by the atomic bomb.

You think that sacrificing bats was cruel? How about dogs?

Yep, puppies were also served up as weapons during WW II. The Soviet Union kept dogs on the brink of starvation and trained them to know that food could always be found under vehicles. By training them this way, when the dogs were released–in front of a group of advancing German tanks–the dogs would immediately look for food under the German tanks, then BOOM! The poor doggy would be sacrificed to stop a tank.

Well, that is what they thought would happen. 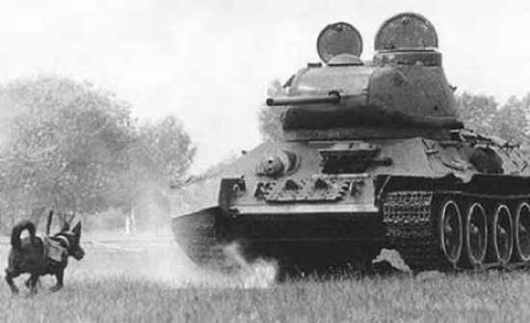 Unfortunately for the Soviet Union, this was not usually the case. For the most part, the dogs were scared of the tanks and usually retreated, running straight back to the Soviet lines–bombs still attached.

The last animal WW II weapon I bring before you today is the Pigeon Guided Missile. This isn’t as simple as the other two. They other two relied on basic animal instinct and training. The Pigeon Guided Missile relied on advanced technology and genius birds. Placing a pigeon inside of a missile, the pigeon would peck on levers to steer towards a certain target. The pigeon would be trained to look for certain targets and used the levers to keep the desired image focused in the cross-hair. The National Defense Research Committee was surprisingly pleased with the outcome, but ventured for superior electronics guidance systems and scrapped the Pigeon guided missiles.