The trial of John Peter Zenger is of importance both in the foundation of America’s judicial system and in the detailed list of Freedoms guaranteed to us in the United States Constitution. In 1733, Colonel William Cosby, New York’s new royal governor, was displeased with a ruling handed down by Chief Justice Lewis Morris; thus, he saw it fit to remove Justice Morris from his position. Colonel Cosby then appointed James DeLancey, a crooked crony of Colonel Cosby, to act as the new Chief Justice for New York. Lewis Morris, with some of his like-minded political allies, hired John Peter Zenger to publish articles in his newspaper, the New-York Weekly Journal. The series of articles were created to be critical of Cosby and his administration, to bring light to Cosby’s political corruption. 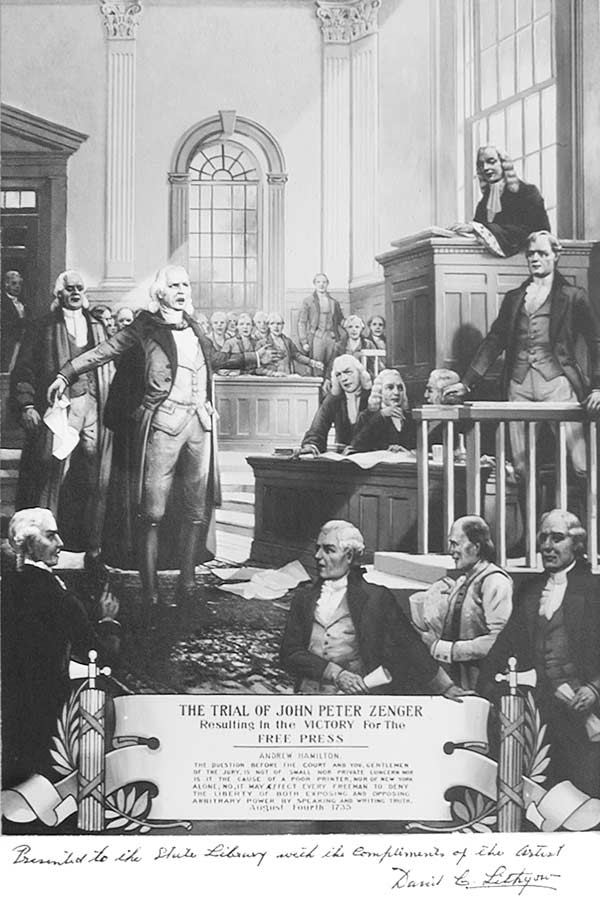 To say the least, Colonel Cosby was outraged and had his attorney general, Richard Bradley, charge John Peter Zenger with seditious libel. Colonel Cosby claimed that the work of Zenger was “divers scandalous, virulent, false and seditious reflections.”  During the primary hearings of the case, John Peter Zenger’s attorney, James Alexander, said that the appointment of James DeLancey as judge would not be fair to his client. Alexander believed DeLancey would be neither impartial nor fair.

As you can guess, that didn’t go over well…

Chief Justice James DeLancey had James Alexander and his co-council disbarred, their names struck from the Council of New Jersey. (Colonel Cosby had already succeeded in having James Alexander’s name removed from the Council of New York.)  However, the fight would not end here. While the sheriff of New York, also an appointee of Colonel Crosby, was gathering together a hand-selected jury, Alexander was putting out requests to the most powerful attorneys in the area. Andrew Hamilton, a lawyer from Philadelphia, would answer the call–and pro bono at that!

By definition of libel laws during this time period, there is no question that John Peter Zenger was guilty. Andrew Hamilton presented to the jury that what had been printed about Colonel Cosby was, in fact, true. When Hamilton attempted to offer up evidence, the judge wouldn’t allow it. Hamilton had the following  as part of his closing arguments:

But to conclude: The question before the Court and you, Gentlemen of the jury, is not of small or private concern. It is not the cause of one poor printer, nor of New York alone, which you are now trying. No! It may in its consequence affect every free man that lives under a British government on the main[land] of America. It is the best cause. It is the cause of liberty. And I make no doubt but your upright conduct this day will not only entitle you to the love and esteem of your fellow citizens, but every man who prefers freedom to a life of slavery will bless and honor you as men who have baffled the attempt of tyranny, and by an impartial and uncorrupt verdict have laid a noble foundation for securing to ourselves, our posterity, and our neighbors, that to which nature and the laws of our country have given us a right to liberty of both exposing and opposing arbitrary power (in these parts of the world at least) by speaking and writing truth. (1) (The entire trial transcripts.)

Andrew Hamilton was able to win with “truth as defense,” with a non-guilty verdict from the jury. A March of Liberty summarized it the following way:

“Andrew Hamilton won his case because a jury of New Yorkers asserted the right to decide the entire case–both the facts and the law–and accepted the argument that a truthful statement could not be a libel.” (2)

“[The Zenger Trial]…did set an important political precedent. Andrew Hamilton had discussed the law as it ought to be, under the conditions…A static, unchanging law was inappropriate… (2)

Do you suppose it is just a coincidence that Gouverneur Morris, known as the “Penmen of the Constitution” and his half-brother Lewis Morris, a signer of the Constitution, were grandsons of the removed Chief Justice Lewis Morris? I think that this relationship played an important role in the passing of the Judiciary Act of 1789 and Article III of the United States Constitution. These laws allow that judges and justices of the Judicial Branch be appointed to serve “during good behavior,” or for life unless impeached and removed from office. This kept corrupt politicians from removing judges because they didn’t like the outcome of a case.

And why are these important?

In 1789, Thomas Jefferson stated to Thomas Paine that,

“I consider trial by jury as the only anchor ever yet imagined by man, by which a government can be held to the principles of its constitution.” –Thomas Jefferson

2) Finkelman, Paul and Urofsky, Melvin. 2011. A March of Liberty:A Constitutional History of the United States. Vol 1, 41.

2 thoughts on “The Trial of John Peter Zenger”