The game of poker is one that’s ever evolving, and many players today only know the history of the game dating back about a decade or so. Poker is a much more storied game than just what you’ve seen on TV in the last few years, though, and today we boil that down to six key moments that help define poker’s history. The history of poker…no bluff. 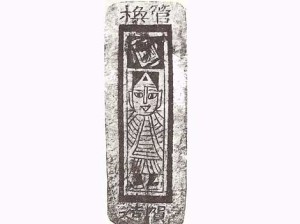 It’s believed that the Chinese first invented playing cards sometime during the Tang Dynasty, which lasted from 618 AD to 907 AD. In 868 AD it was documented that the daughter of Emperor Yizong of Tang played a game known as a “leaf” game. Playing cards would start to spread throughout the world with cards entering Europe sometime in the 14th century and still continuing their spread across the world today.

There are differing views as to the origins of poker. Many think that the game originated in China during the Tang Dynasty as well and is a variant of “domino cards,” a game that was played with painted dominoes. Poker as it is commonly known, with a standard deck of playing cards, is believed to have originated in 15th-century France from the game Poque, and soon spread across the ocean to Canada and then the United States. By the start of the 18th century, the game became wildly popular among French settlers in what would later become New Orleans.

In the early to mid 1700s, Edmond Hoyle began publishing a series of books on various card games. While he did not write a book on the game of poker he is the first to be classified as an expert on card games. He was also inducted into the Poker Hall of Fame in 1979 for his lifetime contribution to gaming. The Hoyle brand continues to this day and is still known as an authority in card gaming, including poker.

While not the only form of poker played in the world, Texas Hold’em is easily the most popular form of the game. Not a lot is known about the early days of the game but the game is said to have started in Robstown, TX, in the early 1900s. Since the game involved more betting rounds, it allowed for more strategic play and the game took off in Texas. The game was introduced to Las Vegas, in 1967, by Doyle Brunson, Amarillo Slim, and Crandell Addington. 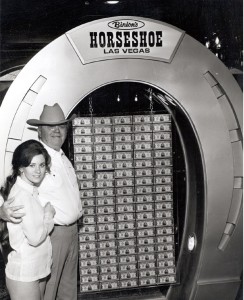 In 1969, Tom Moore of the Holiday Hotel and Casino in Reno, NV, held an invitational poker event known as the “Texas Gambling Reunion.” Benny Binion saw the event and devised a way to bring together the top players in the world and draw publicity for his casino. As such, the World Series of Poker (WSOP) was born.

The first WSOP was held in 1970 and Binion invited seven of the world’s best poker players to take part in a series of cash games. Those who played were Doyle Brunson, “Amarillo Slim” Preston, Johnny Moss, Puggy Pearson, Sailor Roberts, Carl Cannon and Crandell Addington.

Numerous changes have occurred to the WSOP since that time. In 1976, gold bracelets have been awarded to individual winners and the number of both events and participants has increased dramatically. The 2012 WSOP had 61 bracelet events and the Main Event drew 6,598 entrants.

The WSOP has also now expanded to host events in both France and Australia. A “minor-league” system has also been implemented known as the World Series of Poker Circuit with stops all around the United States as well as a stop in Africa. The WSOP is now the largest poker event in the world and the gold standard by which poker players are measured.

Unknown amateur player Chris Moneymaker won his way into the 2003 World Series of Poker Main Event via a $39 satellite tournament on PokerStars.com.

Moneymaker was considered to be just another “dead money” player, like so many others who have won their seat into the Main Event in the past. In fact, the only reason he received any attention whatsoever early on in the event was due to his last name.

As the event continued, Moneymaker surprised everyone by making the final table, and continued his stellar play as he reached heads-up play with the very experienced Sammy Farha.

A well-executed bluff against Farha at a pivotal moment of heads-up play turned the momentum of the match into Moneymaker’s favor and eventually he would win the event when his 5d-4s out-flopped the Jh-10d of Farha.

Moneymaker’s $2.5 million win was not just an impressive feat for an amateur but it was also inspiration for amateur players around the world. Millions took to online poker as a way to improve their skills and the “Poker Boom” began.

Moneymaker’s win spawned thousands of new events and led to monumental growth at the WSOP and in poker in general.  Many of the events played today as well as many of those working in the poker industry can thank Chris Moneymaker for bringing about the current era of the game. 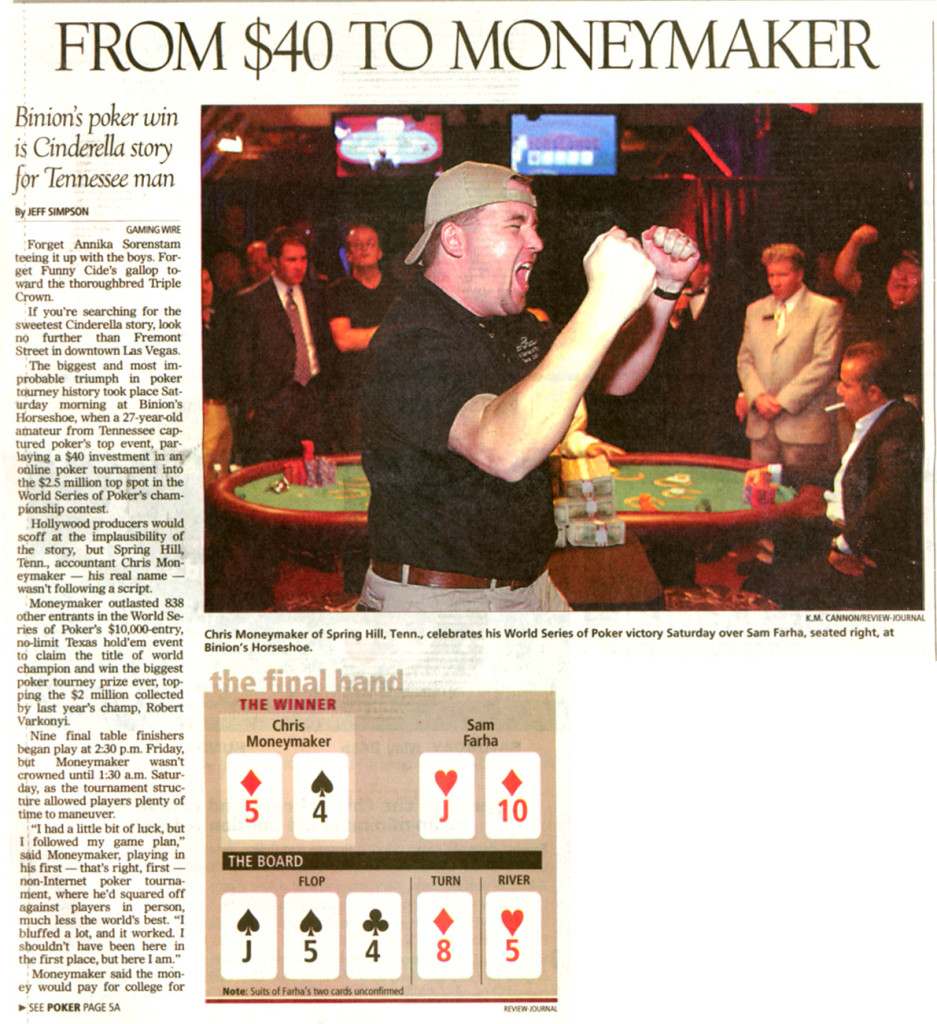 1 thought on “The History of Poker in Six Essential Moments”