What’s in a scent? Attraction is said to be triggered by different kinds of scents. Wearing the right cologne or perfume that compliments your sweat glands will help you connect better with people or even find the right partner.  Experts say that your scent actually transmit signals that reveal your genetic makeup, moods, and sexual preferences or orientation. Yes, that’s a ton of vital information in a sniff.

Pheromones In A Nutshell

The way to a man’s heart isn’t really in the stomach – it’s the nose. Pheromones or also called ecto-hormones are said to be chemicals that trigger varied responses in people. These are described to microscopic, tasteless, and which is naturally produced in the body in the form of sweat, tears, or urine to elicit response from other people. This actually creates response from outside of the body. This can certainly impact response in people when it is picked up by their vomeronasal organs. Animals were also documented to communicate with the use of pheromones. The olfactory epithelium or sensors process these varied information and create a specific response. Pheromones are actually linked to menstrual cycles and fertility. This is also associated with animals’ behavior on marking of territories. While studies on animal pheromones were substantial, human pheromones are still rendered limited and inconclusive at this point and would need more extensive research. 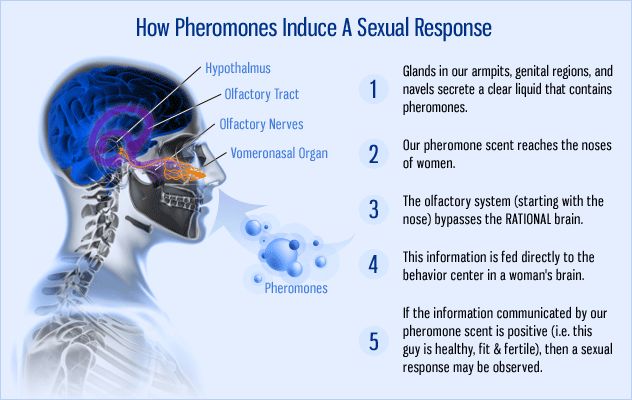 When, Where, and How Pheromones Started

Early evidence of the existence of human pheromones was discovered by Dr. Martha McClintock in 1998. She has found out that menstrual cycles of different women would synchronize due to the chemical messages transmitted whenever they sweat. They have also found out that men and women respond differently to pheromones.

It was in 1959 that the term pheromone was conceptualized by Martin Luscher and Peter Karlson which refers to a chemical cocktail released from animals which is picked up by other animals which serve as a communication gateway. The very first pheromone “bombykol” from silk moths were also discovered at that time.

Today, many advertisers and business sell pheromones with the claim that it can trigger heightened sexual response which remains to be very controversial even to this day. Recent brain imaging studies done by Swedish researchers established that humans do exchange communication signals with their odor and people respond differently to such. These signals are channeled onto the hypothalamus which affects mood, behavior, emotions, reproduction, and sexual behavior.

In early Egypt, perfumes were only used by the elite few. As such, only those who are at the high stables or have high political ranks use perfume generously. Perfume was discovered and started in Egypt but mass production and distribution was incepted in Paris. Today, pheromones are integrated with perfumes and colognes by using synthetic pheromones which is currently being marketed as a perfume that will increase sexual attractiveness. This is also said to boost confidence and sexual appetite of both men and women.

You can easily buy pheromone perfumes online or in pharmacies and aromatherapy shops and then you can combine it with your favorite perfume. When making a pheromone perfume, you must first combine three essential oils or scents which consist of the top note, middle note, and base note. You then now combine everything in a perfume bottle. Now, pour a generous amount of pheromones and then shake. Store your concoction for at least two weeks before use. After storing it for two weeks, open to check on the scent then add two teaspoons of distilled water. Shake it and then it’s ready to use.

Other resources on the history of pheromones