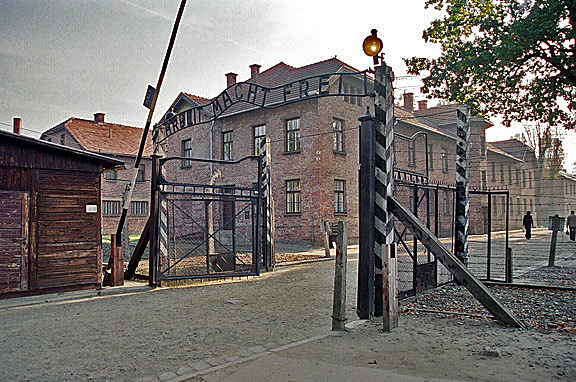 Go ahead, read it again. You didn’t read it wrong. Until recently, I too was unaware of the brothels inside of Auschwitz. I just finished BBC Worldwide’s Auschwitz – Inside the Nazi State. This two-disc, five-hour, documentary was definitely eye-opening. (See below to redeem a special offer to watch it for free on Netflix!) I have done enough reading and research in years past to be familiar with Hitler, the Nazi Party, and the Holocaust to know several tidbits regarding Auschwitz. However, watching this six-part documentary taught me a few new things. Probably the most shocking of this newly gained knowledge was learning that women were forced to work in brothels. I knew that camps, such as Auschwitz, were work camps, so there was not much use for women and the majority of them were immediately led to the gas chambers. So I was shocked, not only by the cruelty of the Nazi SS officers, forcing these women to work in brothels, but that there were enough women to fully employ a brothel. Before I go any further, this is definitely a documentary worth checking out. If you click on the picture below it will take you to Amazon where you can buy it. (If you have Netflix, you can watch it for free on Instant Streaming!)

Not only was there a brothel in Auschwitz, which took place in Block 24, but nine more in other concentration camps spread across German occupied Europe. In 1942, the SS, under the direction of Heinrich Himmler,  opened the first concentration camp brothel at Mauthausen. While there are many speculatory suppositions as to why this was initiated, Himmler himself thought it would be an effective incentive to promote a hard work ethic. In a letter to Oswald Pohl, he said:

“I consider it necessary to provide in the most liberal way hard-working prisoners with women in brothels.”

There are those that believe that these brothels were established to stop “the spread of male homosexuality within the camp.” [1] It was thought that if the homosexuals were forced to have sex with these women, it would cure them.

Of course it goes without saying that these brothels weren’t only used by prisoners. The women that worked in the brothels, of German, Czechoslovakian, Hungarian, and Polish descent, were often used for sex by SS officers. For this the women were better fed and not treated as poorly. Many women knew that this was the difference between living and dying. Promised freedom from the camps–which of course never came true–the women worked in the brothels an average of two hours per night, having sex with six to eight men during this two-hour time period.

You would think that as a “hard-work[er],” given the right to visit the brothel, it would not be a humiliating event, but it was. If an SS officer had given you a brothel permit, you would first be medically examined. If everything checked out, when it was your time, your name would be read aloud at evening roll call, then you would be marched to the brothel. Once at the brothel, a doctor applied medicinal cream to your genitals.

Surely from here there is not much more humiliation that one person could endure, right?

Dr. Robert Sommer, author of Das KZ Bordell (The Concentration Camp Brothel), said that “only 15 minutes’ sex and the missionary position were allowed.” If the prospect of being on a timer wasn’t pressure enough, “the SS had spy-holes to check up on them.”

The use of these brothels wasn’t common for the majority of men in Auschwitz, Sommer estimates that less than 1 percent of the camp population ever had access to brothels; it goes without saying that Jews were never permitted to partake in the usage of the brothels. I understand statistically that the number of men using and women employed in the brothels were low, but how is it that the knowledge of Auschwitz Block 24 is not well-known?

“It didn’t fit so easily into the postwar image of the concentration camps as monuments to suffering.”

“It would have compromised their status as martyrs.”

I believe that Auschwitz, like much of the terror of Hitler’s Nazi Party, is firmly focused on Jews. Nowadays, the term Holocaust is thrown around more than any other. The problem is that the term Holocaust generally only refers to Jewish deaths. If you check out the definition of Holocaust on Wikipedia, it briefly tells you the definition, then immediately tells of arguments where “scholars maintain that the definition of the Holocaust should also include the Nazis’ genocide of millions of people in other groups.” Below is a chart from Wikipedia.org showing estimated death counts. 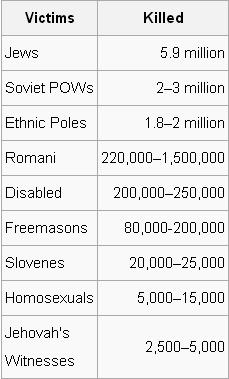 As Jews do make up the majority, and Jews were not allowed to participate in the brothels, I believe that this is why the brothels of concentration camps were never made a large component of the camps’ history.

31 thoughts on “The Brothels of Auschwitz”