The Bonus Army was the name of the 43,000 men and women that marched on Washington D.C., during the spring and summer of 1932. What a peculiar name– Bonus Army? It isn’t that odd actually, because they were trying to get their promised bonuses. During times of war–as it was in 1776–those that fought for their country received war-time military bonuses to cover the difference between what a soldier earned, as opposed to what he would have earned if not enlisted.

With the ending of World War I, the veterans did not feel as if they were being properly compensated when they were only offered sixty (60) dollars for their war-time military bonuses. This was not the first time that veterans marched on the capitol for monetary gains. The American Legion knew this, and they spearheaded the political movement mirroring the 1783 Continental Army’s march on Pennsylvania.

When the World War Adjusted Compensation Act landed on President Calvin Coolidge’s desk, on May 15, 1924, he vetoed the bill. This bill would have granted the veterans bonuses, but President Coolidge felt as if:

patriotism…bought and paid for is not patriotism.

As an aside, I though this was ironic as President Coolidge didn’t turn down his annual salary of $75,000 a year. And out of all of the Presidents of the United States of America, he was the second “poorest.” I think “Silent Cal” should have kept his mouth shut…

Within four (4) days, Congress overrode his veto, and the World War Adjusted Compensation Act was passed. Each veteran was to receive $1.00 for each day of domestic service and $1.25 for overseas service. Bonuses under $50.00 were paid immediately; however, bonuses over this amount were issued as Certificates of Service. These certificates would not fully mature until 1945, twenty (20) years later. The United States issued 3,662,374 certificates, with a maturity value of $3.638 billion . (This is roughly $45 billion in today’s dollars.) 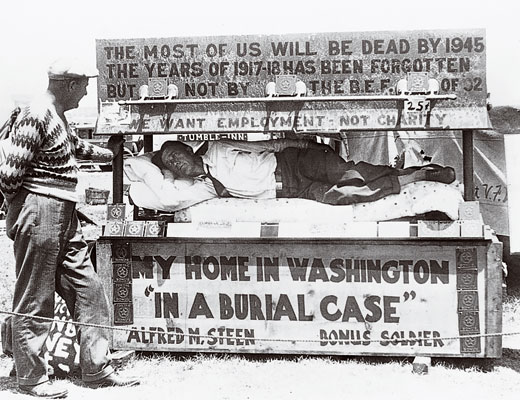 The Roaring Twenties were over, and The Great Depression was a heavy burden on all Americans. The veterans who had received the Certificates of Service believed that they should have immediate access to their promised money. Starting in 1932, the Bonus Army, composed of 17,000 veterans, and their family and friends, marched on the capitol demanding immediate cash-payment redemption for their Certificates of Service.

The veterans did not want to wait, and as you can see in the picture above, there were many who believed they would not live to see the day when their bonuses would be paid.

Make sure you check back tomorrow when I cover the events of the Bonus Army Conflict. This event led to over one-thousand injuries and four deaths.

2 thoughts on “The Bonus Army and Their March on D.C.”