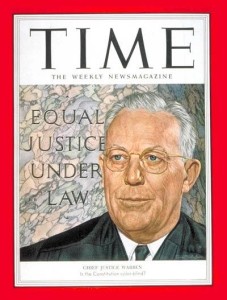 Recently I was asked to “choose the Supreme Court Justice who initiated the most change in U.S. Constitutional doctrine and who left the largest impression on the American people.” Let me tell you, choosing just one justice was no easy task. The following is an excerpt from a paper that I wrote that briefly explains why I believe that Supreme Court Justice Earl Warren is the best answer to this question.

If one looks at the history of this country, it is broken down by three major events. 1)The birth of America came after the Revolutionary War, which led to the forming of a new government; 2) then the South seceded from the Union leading to the American Civil War, which in turn led to the freedom of slaves and the passing of the Thirteenth, Fourteenth, and Fifteen Amendments, as a result it pushed a reunited America into the Reconstruction Era; and lastly, 3) the National Civil Rights Movement gathered steam in the mid-to-late 1950s, ushering in the nation’s hope to truly ensure, as the Declaration of Independence puts it, that “all men are created equal.“

While it is certainly noticeable that the first two events were wars, which led to the destruction of several major cities and the death of thousands, the third event was predominately peaceful. Could it be that cooler heads prevailed, or was it that great men helped ensure that the National Civil Rights Movement was a success? Often civil rights activist such as Martin Luther King, Jr. and Rosa Parks, and politicians such as President Lyndon B. Johnson and Robert Kennedy steal the spotlight for their parts in this time period of turmoil and social change, yet the branch of the government that continually looks out for the minority is overlooked. How quickly we forget that the Judicial branch was established to protect vulnerable minorities against the tyranny of the majority. That being said, the efforts of Chief Justice Earl Warren, during this era of dramatic social and economic change, makes him—in my opinion—the Supreme Court justice who made the largest impact on U.S. Constitutional doctrine. 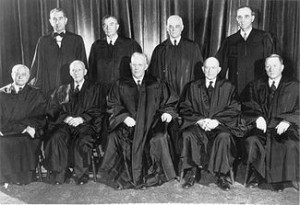 Now, it should go without saying that the Supreme Court is made up of nine members, so Chief Justice Warren hardly carried the entire load by himself. There is no doubt that as a legal scholar, Justices Hugo Black, Felix Frankfurter, and William Brennan surpassed Warren by leaps and bounds. However, first and foremost a politician, Chief Justice Warren had leadership skills that allowed him to bend the Supreme Court to his will. Examples of this shine through in all of the segregation cases that came before the Court. In every case regarding segregation, Warren was able to procure a unanimous vote. In Brown v. Board of Education (1954), Warren worked with all of the justices until his opinion was endorsed by each justice of the Court. This unified front was needed to fully support the desegregation of school in America and to bring an end to Plessy v. Ferguson (1896).

After the success of Brown v. Board of Education, the court shifted its focus from property rights to individual rights. Over the next decade, the Warren Court would work closely with criminal proceedings to ensure fairness across the board. In 1961, in Mapp v. Ohio, the Court refused to allow evidence that was seized in an illegal search. In 1963 the Court would decide for two landmark cases—Griswold v. Connecticut and Gideon v. Wainwright. In Griswold v. Connecticut, the Court held that Connecticut’s law prohibiting the use of contraceptives violated the right to marital privacy, and it was unconstitutional. In Gideon v. Wainwright, the Court unanimously held that state courts were required to provide counsel in criminal cases in which the defendant was unable to afford their own.

While the Court did look out for the rights of the individual, not all criminal cases which reached the Court were in favor of the defendant. In Terry v. Ohio (1968), the police were extended the power, by the Court, to stop and frisk individuals which were believed to be carrying weapons. 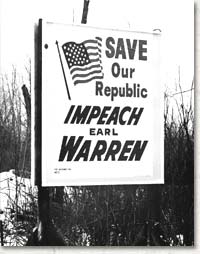 Of course, not all of the Warren Court decisions were appreciated. Engel v. Vitale (1962) enraged a large portion of the country, and decades later this decisions is still frowned upon. In Engel v. Vitale, the Court outlawed the mandatory school prayer laws in place, in the state of New York. The following prayer landed this case in Supreme Court: “Almighty God, we acknowledge our dependence upon Thee, and we beg Thy blessings upon us, our parents, our teachers and our country. Amen.” This case would open the floodgates to a slew of First Amendment cases.

In Melvin Urofksy’s A March of Liberty: A Constitutional History of the United States, Urofsky states that “the Warren Court produced a string of great cases matched by no other court in our history, not even that of John Marshall” (Urofsky 920). It would appear that this is true not just for the length of time that Warren was Chief Justice, because even though he retired from the Court in 1969, the Warren Court—in essence—remained in place in 1986, until the appointment of William Rehnquist as Chief Justice.