I find it somewhat annoying when a reputable source–that I have used for quite some time–has an error. I know that no source, especially one that continually adds material, cannot be correct 100% of the time. Even the New York Times, the most Pulitzer Prize winning newspaper in America, has a placement in their daily paper for corrections.

It is just disheartening. 🙁

The History Channel has several apps out for the iPhone; as one that loves history, I have downloaded the majority of them. The two that I have most enjoyed are History Here and Bet You Didn’t Know.

History Here’s description in the Apple iTunes Store is as follows:

HISTORY Here is an interactive guide to thousands of historic locations across the United States, brought to you by the HISTORY CHANNEL. The easy-to-use interface, photos, video and dynamic maps bring history to life anywhere in the country. Whether you’re on vacation or just running errands, the app makes it simple and fun to get the facts on the history hidden all around you, including amazing architecture, museums, battlefields, monuments, famous homes and much more!

I haven’t had much opportunity to test this app out yet, but it shows historical sites near you, based on your phone’s location. I haven’t been overly thrilled with the Memphis selection, but I did learn that roughly forty-five miles from my current location is the Alex Haley House Museum. I have never been, and now that I know how close it is, I have placed it on my to-do list.

Look how close I am right now to Sun Studio! Why do I have to be at work, with so much rich, musical history nearby? 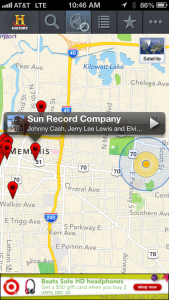 Bet You Didn’t Know’s description in the Apple iTunes Store is as follows:

If you love facts and are curious about history, The Bet You Didn’t Know app from HISTORY offers a unique look at human civilization with an exclusive collection of surprising and fascinating facts.

Inspired by the groundbreaking series “MANKIND The Story of All of Us,” the app features hundreds of short, fun facts written and curated by the HISTORY team.

I don’t watch much television, so I cannot speak for the show. I absolutely love[d] the app. It was fun, the facts were interesting, and the presentation style was engaging. It was cool until this morning. The other day I ran across the following page of the app.

I saw this and thought, “How great!” I sat down to write a post on the first and shortest Presidential Inaugural Address in United States history. I pulled up George Washington’s address on several sites; words upon words, paragraph after paragraph. It goes without saying that George Washington’s inaugural address, delivered on April 30, 1789, was certainly NOT the shortest in history. His first speech was 1419 words in length. I will, however, give History Channel some credit. It was George Washington who delivered the shortest inauguration speech, but it wasn’t his first.

On March 4, 1793, George Washington gave his second inaugural speech. This would be, and still remains, the shortest inauguration speech in the history of the United States of America. Totaling 135 words–not 133–below is the address, in its entirety.

I am again called upon by the voice of my country to execute the functions of its Chief Magistrate. When the occasion proper for it shall arrive, I shall endeavor to express the high sense I entertain of this distinguished honor, and of the confidence which has been reposed in me by the people of united America.

Previous to the execution of any official act of the President the Constitution requires an oath of office. This oath I am now about to take, and in your presence: That if it shall be found during my administration of the Government I have in any instance violated willingly or knowingly the injunctions thereof, I may (besides incurring constitutional punishment) be subject to the upbraidings of all who are now witnesses of the present solemn ceremony.