Morality, as defined by Wikipedia.org, is the differentiation, decisions, and actions between those that are good (right) and those that are bad (wrong). There is a certain aspect of morality that has been passed down from generation to generation, the morality of sex.

With any history concept it is important to start not only with the event under the microscope, but with all events leading up to it. As far back as anyone can remember there has been a certain standard of chaste and practicing of abstinence continually preached to us.  Herein lies the problem. The myth that ‘there was no premarital sex among couples’, before the drug, sex, and rock and roll era—or any era, for that matter—is a common misconception. America’s sexual history is one that is “sexually boisterous”. [1] To say that America started as a religious nation and sustained a lifestyle of preserving the individual’s virginity until marriage, would be a myth passed down by our elders. While this lie has been one based on good intentions, much like the Tooth Fairy, it is a lie nonetheless. I am sure you can remember receiving the sex talk from your parents. In this discussion they explain the birds and the bees, and ‘how important it is to wait until you are in love and married to start having sex.’ But unless you have a Preacher/Religious Educator father like I did, statistically, this is probably not the case.

What is worse is that our elders stick by their guns and insist that the degradation of morals started with our generation. However, through the statistics provided, one can see that this is clearly not the case. [1][2][3][4] The sexual acceleration of our country started with the landing of the Mayflower. Historians have several educated theories about why sexuality was so progressive in the 1700’s. (An important factor to remember is that we will be tracking trends of premarital sex and pregnant brides. This means that the majority of the people we will be talking about are teenagers and those in their early 20’s.)

The two main theories that explain the rapid increase of pregnancies, out-of-wedlock, is a breakdown in the normal ties of the standard family and the collapse of the church. As an example, we will focus on the town of Chesapeake Bay. Half of the citizens of Chesapeake Bay would be lucky to reach a life expectancy of twenty-five (25). As this number is so low, the average marriage only lasted seven (7) years before one of the spouses passed away.[2] This often meant that children grew up with only one or no parents. With this little amount of supervision, the hormone-raging teenagers got in trouble, lots of trouble. The second supposition is that the New England region had a falling out with the church.  The decline in the size and active participation in church was clear and spread across the entire region. Whether it was because of these reasons or one that I didn’t run across in my research, the percentage of brides pregnant at the altar was thirty (30%). There were some cities, such as Chesapeake Bay, where the number was as high as forty percent (40%). [2]

In addition to the low, average age death rates, it was important to start families at a young age out of necessity. As ninety-five percent (95%) of the American population lived in rural areas, large families were needed to tend to the farm.[5]  At the end of the 18th century, the average family had seven (7) children. Between this statistic and the fact that the average age of the citizens of the American colonies, in 1775, was sixteen (16), it is easy to see that the country was one of ‘babies having babies’.[2] The population of the colonies increased from 250,000 in 1700 to 2.4 million by 1775. [1] In seventy-five (75) years, the population grew at an alarm rate because of the constant pregnancies.

Leading into the 1800’s there was a small decline in premarital sex and births of babies. Well, there is speculation that there was a decline in premarital sex. I believe that there was no decline. As the average number of children changed from seven (7) in 1800 to 4.25 by 1880, there is no way that across the board people had less sex and babies. premarital sex has nothing to do with these decreases in numbers. I believe that the numbers went down extensively because of contraception. Whether animal stomach intestine condoms or female sponges are to thank, this allowed youngsters to continue in their fornication lifestyle. In the way that religion is believed to play a role in the decrease in moral—leading to lots and lots of sex—some believe as the newly founded independent America took an interest in religion once more, morals were raised. 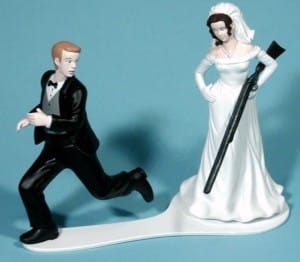 Some historians believe that the second and third Great Awakening was instrumental in the decline of pregnant brides. [2] In the way that the Great Awakening abolished slavery, it attempted to also abolish shotgun weddings. While there was a general decline in apparent illicit sexual activity (that statistics show), I believe that contraception, not increases in religion, is the cause of why statistics showed a drop in the abundance of immoral pregnancies. You will see in the next article that the start of the 1900’s led once again to a sharp increase in premarital sex and pregnant brides. Why? For the answer, make sure you stick around for part two, which focuses on the 1900’s to date. Part two gets into an invention allowing sexual rendezvous to increase, the sexual revolution of 1960’s, and the end of shotgun weddings.