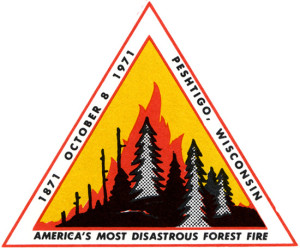 When I mention a fire that occurred on October 8, 1871, most people assume that I am referring to the Great Chicago Fire. However, that would not be the case with this article. On October 8, 1871, multiple fires brought havoc on cities in the United States. The most notable of these fires were the Great Chicago Fire, the Great Michigan Fire, the Port Huron Fire of 1871 (some include this as part of the Great Michigan Fire), and the Peshtigo Fire. (Before I go any further, does anyone else think it is a sick joke that Chicago’s professional soccer team is the Chicago Fire?) As Chicago was the fifth largest city in America during this time period [1], this fire was the most reported and had the greatest impact on the economy. That being said, the other fires–especially the Peshtigo Fire–were greatly underreported. The Peshtigo Fire was much more disastrous and still to this day is significantly overlooked.

The quick statistical rundown for the Great Chicago Fire is as follows: the fire spread quickly and covered an area of 3 1/3 square miles, leaving hundred dead (most estimates are around 300). [2] Now compare that set of numbers with the numbers I am about to give you, and you tell me that the Peshtigo Fire wasn’t greater than the Great Chicago Fire. The quick statistical rundown for the Peshtigo Fire is as follows; feeding on the ever-abundant, nearby forest, the fire destroyed 1,875 square miles and claimed between 1500 and 2500 lives. [3] To this day, the Peshtigo Fire is still the deadliest fire in United States history.

The Peshtigo Fire has been described as “…a wall of flame, a mile high, five miles wide, traveling 90 to 100 miles per hour, hotter than a crematorium, turning sand into glass.”

I would imagine that this sight would a frightening sight to behold. Below are two stories from the fire; both stories are sad, horrific and explain the swiftness of the fire. 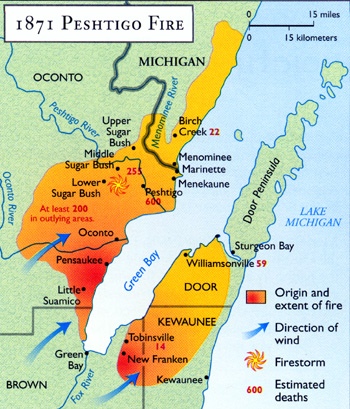 “One man watched helplessly as his wife and child were consumed by the fire. Most likely thinking he was doing them a mercy, he killed his remaining two children and then himself.”

“The Lemke family was also having a rough time. As the fire quickly closed in, ready to add the Lemke farm to its menu, Charles Lemke and his wife Fredericke (who was about to have a baby) piled onto the wagon with the couple’s five children. Apparently the horses spooked and Charles was knocked from the wagon as the horses raced off. He managed to catch up, but just as he did, one of the horses was knocked down by debris. When Charles went to tend to it, the mare got away. He went to follow and then turned back to his family only to see the fire had quickly claimed them.” [4]

It makes you wonder, “How often did natural disasters like this wipe out entire cities and never a mention was made in any historical record or history book?”

Is it possible that before the media and press that tragedies like this occurred all the time, yet no one had the knowledge or ability to record them?

I wonder how much history has been lost, never to be known?

[4] The Hungry Blaze: The Peshtigo Fire