Any establishment can claim to be a 4-star hotel. What makes Billesley Manor different from the rest of the 4-star hotels in Britain? History! I am not referring to the 100-year-old Topiary Garden; though, from pictures I have seen, that would be worth the stay itself. When you arrive to this majestic manor, do not be fooled by the 17th century decor that accentuates the hotel’s structure. While there have been changes and upgrades over the last few decades, these and the 17th century renovations (including the rebuilding of the church, in 1689) are all “recent renovations.” It may seem odd that I clump together both renovations from the 21st and 17th century into the same category, but I am not quite sure that you understand exactly how old Billesley Manor is. Billesley Manor has a history that dates back to 705 AD. When you spend the night in Billesley, you are sleeping where several, significant historical events occurred. It was here that Shakespeare put ink to paper and wrote As You Like It, where the famous line “All the world’s a stage” is found. It was also home to one of the most highly regarded ancient surnames of England, the Trussells.

The Trussells were an interesting lot, so lets jump forward several hundred years to the Trussell’s arrival to Billesley. It was 1085, William the Conqueror conquered most of England and placed it under Norman control. In 1086, William sent out men to survey all his newly acquired land. William the Conqueror needed a census so he could properly tax the villages. These records were collected and transcribed into the Doomsday Book. It is here that records indicate the first person in possession of the property. The Doomsday Book shows that in 1066, Saxon Baldwin became the owner of Billesley Manor, and that in 1086, Osbern was the current tenant. These records also show that in 1086, the population of Billesley was 26; for this time period, a population of 26 was considered “rather large.”

The way that the Doomsday Book reads, it implies that Osbern is the son of Hugh Trussell. If this is the case, this would be the first recorded instance of a Trussell at Billesley Manor. From 1086, to 1588, Billesley Manor would change hands many times, primarily through the Trussell family; however, there were instances where this was not the case. As some of the following events took place nearly one-thousand years ago, some of the stories–like a lot of early history–have been passed down for generations, with no tangible evidence.

Whether it was due to greed, unluckiness, or karma, the Trussells had several unfortunate obstacles to overcome in maintaining ownership of Billesley. The first in a long line of these events occurred in 1215. If you have a grasp on history at all, 1215 should instantly trigger a recall of an event, one of great importance. 1215 marks the start of men standing up for what they believe in, for freedom and independence. If it hasn’t hit you yet, 1215 was the year that King John was forced to sign the Magna Carta. An unnamed grandson of Osbert Trussell (not the previously mentioned Osbern), was in the group of English Barons that were involved in forcing King John to sign the Magna Carta. King John abruptly died after this, and his son, Henry III, forced Trussell to forfeit the Billesley estate as punishment for his part against his father. It is unknown how, but other members of the Trussell family were able to reacquire the property back, almost immediately.

For several generations to come, the Trussells could look forward to a lush life at Billesley. It is important to understand that the Trussells were not your run-of-the-mill family. Before the Battle of Evesham, William Trussell was the Sheriff of Warwickshire. Generations later, his grandson, also William Trussell headed the delegation of Parliament that informed King Edward II that his reign was over and that his subjects were renouncing his majesty. With the following words, a Trussell ended the reign of one king, and started the reign of another.

I, William Trussell, proctor of the Earls, Barons and others, having for this full and sufficient power, do render and give back to you, Edward, once King of England, the homage and fealty of the persons named in my procuracy; and acquit and discharge them thereof in the best manner that law and custom will give. And I now make protestation in their name that they will no longer be in your fealty and allegiance, nor claim to hold anything of you as King, but will account you hereafter as a private person, without any manner of royal dignity.

Within twenty years of this swift and decisive action, another swift event would occur. Within a matter of two years, the Black Death would plague England and kill almost two-million people. Once the Black Death made its way through Billesley, only four people were left alive. Without the workers to continue farming, the Trussell’s took to raising sheep. Raising sheep proved to be not nearly as lucrative, and the Trussell family struggled financially. The family’s financial problems went from bad to worse after the War of the Roses, in 1485. Once again, on the wrong side of royalty, a Trussell had played with fire and lost. As King Henry VII took over, the Trussell family and Billesley Manor continued to decrease in stature.

In 1588, the Billesley estate would be lost for the last time. In complete despair, Thomas Trussell committed highway robbery and was caught. He was convicted and sentenced to death. The crown took the estate and sold it off. While being solely responsible for losing Billesley Manor, Thomas Trussell was fortunate enough to skip execution and lived for another fifty-two years.

Overall, the Trussell family had a long run at Billesley. For those of you into genealogy, below is a family tree of Trussells. Those with asterisks (*) next to their name are those that were Lord of the manor. And for those of you into travel, the next time that you are near Warwickshire countryside, stop by and check out Billesley Manor. If you are a romantic, have your wedding at Billesley Manor. It is rumored that this is where Shakespeare married his wife, Anne Hathaway. 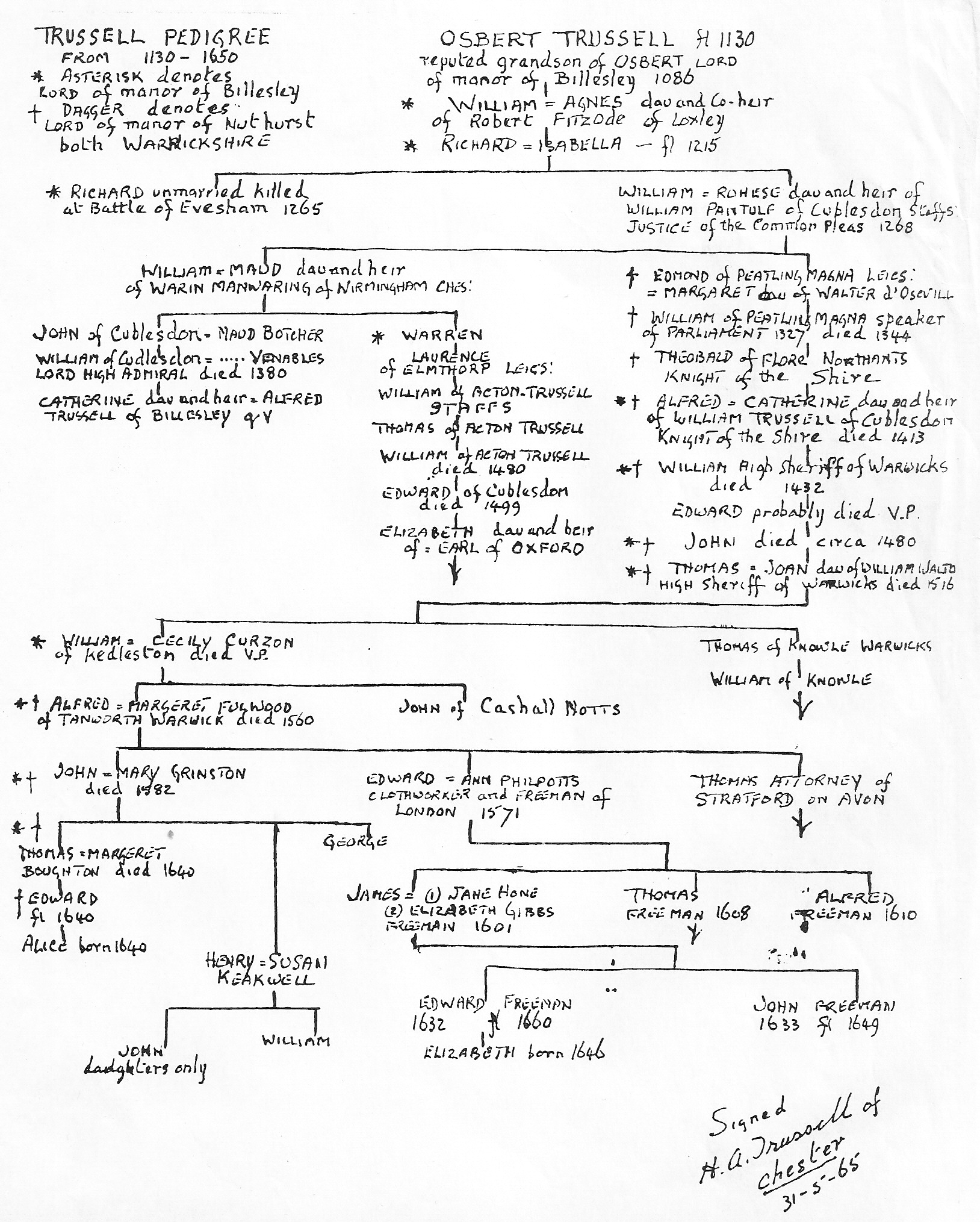 13 thoughts on “Billesley Manor and the Trussells”