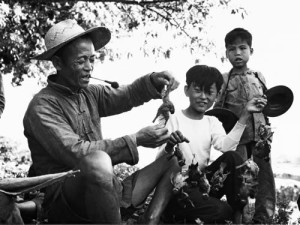 In the late 1950s Mao Zedong organized agricultural reform, aiming to lead China to a prosperous future. This is when the most significant destruction of sparrows in the history of mankind started. Great Mao urged all citizens of the Celestial Empire, both adults and children, to destroy the four major vermin: sparrows, rats, flies and mosquitoes.

It is quite clear why to kill mosquitoes, rats and flies. But the reason for destroying sparrows is not so obvious.

What was wrong with small birds? What did they do to Mao and Communist Party?

By 1958, the Chinese Communist Party has been in power for almost nine years. The Nationalists under the leadership of Chiang Kai-shek were defeated and exiled abroad, internal enemies were beaten, and Communist China finally got its first government. The chairman, Mao Zedong, decided it was time for the “Great Leap Forward.” He focused on rapid economic development and gaining superiority over Western countries. A new campaign aimed to modernize industry and agriculture was proclaimed.

The theory of the “Great Leap Forward” assumed sparrows were eating crops just sown on the fields, thus these tiny birds should vanished. This would inevitably lead to the Golden Age of the peasantry in China.

The next problem was how to destroy sparrows. Shooting them will not work, as too much ammunition that could be used against the counter-revolutionaries and world imperialism could be wasted. Poison is also not an option; the danger of possible poisoning people is too high. Traps are good, but setting millions of traps was too troublesome–even for Communist China. The government found a wise decision! Why not to allow the peasants themselves take up the noble task of getting rid from sparrows in their own villages?

The extermination of sparrows in China began with the shouting out the slogan “Long live the great Mao” and the waving of rags attached to long poles. In parks, on the streets and on the rooftops, people (city dwellers and peasants, students and the elderly, men and women) were screaming, whistling and waving rags, knocking on pots, doing everything to force sparrows remain in the air as long as possible.

The expectation that the sparrows can not be in the air for more than fifteen minutes without rest was justified. All the villagers went to the fields, shouting and waving their hands. Birds exhausted with long-term flying in the air having no possibility to land anywhere literally began to fall from the sky. Those who did not die from hitting the ground were killed with any tool in the hands of Chinese people. Those birds that managed to find refuge in the tree and did not respond to the cries of the crowd were shot.

During the six months nearly 2 billion sparrows were killed, and in Beijing and seaside regions all small birds were killed. Yes, there was the reason for joy: the peasantry could finally breathe freely, there were no longer annoying birds pecking seeds in the furrows, it was possible to hope for a profuse harvest. And so it happened – in 1959 the harvest was much more significant than in previous periods. However, along with cereal the number of locusts and caterpillars was successfully growing, since there were no more birds eating them. Sparrows were proclaimed to be the enemies of communism. The next year, there was a food catastrophe – the locusts destroyed crops. Famine started. As a result, approximately 10 t0 30 millions of Chinese citizens died.

In 1959, the Chinese Academy of Sciences looked at the problem from a new angle, and recognized that the war against sparrows was a huge mistake. The following year, the great Mao made a willful decision to stop the fight with sparrows, having found a new enemy – bed bugs. And of course Chinese people had to revive sparrow population. Little birds were even imported from the Soviet Union and Canada, and in the early 21st century a campaign defending sparrows began.

About the author: Paul Smith is proficient in history and archeology. His articles are waiting for you at quality essay writing service, Paul is ready to communicate on different topics on Google+