The History of Poisoned Halloween Candy, what could be more fitting with less than a week before Halloween?

With every mother and father doing last-minute preparation for next week’s festivities, I think it is only fair that I pass this article on. With the number of nut-jobs growing exponentially, I found the following somewhat comforting. As you apply the last piece of fabric to your child’s Halloween costume, or you muster up all your artistic talent to face paint the perfect cat whiskers on your child, you can safely know that based on research–completed by mental_floss [1] and Snopes [2]–your child is much less like to be poisoned than you have been scared into believing.

I ran across the article last night on mental_floss, Has Anyone Ever Really Handed Out Poisoned Halloween Candy?, and I sighed a sigh of relief (and I don’t even have kids). I will let you read the articles for yourself (especially the one from mental_floss), but it looks as if history proves that the likelihood of a stranger poising your child’s Halloween candy is slim to none.

Slim to none… so what are the real numbers?

Joel Best, Professor of Sociology and Criminal Justice at the University of Delaware, studied reports of tainted or rigged trick-or-treat candy over a span of forty-seven years ending in 2005.  He concluded that there is not one single substantiated case of injury due to such an incident. [3]

So it seems that candy–for the most part–is safe. Whew! 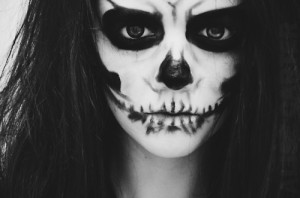 Now there are still many things to worry about. In fact, when I looked up the main safety concerns over the last three to four years, most of them are about face makeups that contain lead. As many parents fear that masks hinder vision and result in accidents, they lean towards face makeup, which is a quick and safer substitute. So you thought…

Ten out of 10 face-paint products tested contained lead, which can harm children’s developing brains, the report said. Six out of 10 contained nickel, cobalt and/or chromium at higher-than-recommended levels. [4]

So while your child might think that he/she looks ‘dope’ with their awesome face paint, make sure that they are not using harmful face paint makeup. While this open, screaming mouth looks cool, your brain and skin–absorbing the high levels of lead–might not agree. In fact, if your brain could scream, I would imagine it would look somewhat like the picture.

There are some other safety concerns you might want to know about. (Who knew with this history reflection you would also get a public service announcement. “Now for the Hankering for History PSA.”) Below are three other safety precautions you may want to consider.

That last one is incomprehensible to me. Spookathon.com says that the biggest danger that trick-or-treaters face on Halloween is “Adult Halloween revelers behind the wheel of a car.” So it really isn’t the psychos, drug dealers, and rapist we need to be weary of; the people you should protect your children from on Halloween are your friendly neighbors. These neighbors, that on any other night are responsible, caring individuals, selfishly had too much to drink, on this night, and decided to drive home from a party…down your street.

Of course, the increase in drunk and reckless adults behind the wheel is the real threat.  Unfortunately, praising designated drivers just doesn’t make for flashy news.  Tainted candy, on the other hand, is so feared that some hospitals have set up ineffective and wasteful programs to x-ray candy for safety, diverting much needed resources from such very real threats as motor vehicle accidents.  Health and safety experts generally recommend discarding unsealed candy.  This makes good sense in terms of hygiene and teaches children to exercise caution and common sense in dealing with strangers in general.  However, the number of documented injuries from tainted Halloween candy is in fact no greater than the number of documented injuries due to alien abduction.

So let’s not completely discount the threat of candy, but please make sure that you are watchful of your children as they cross the streets this Halloween.

[1] Mental Floss: Has Anyone Ever Really Handed Out Poisoned Halloween Candy?

4 thoughts on “The History of Poisoned Halloween Candy”